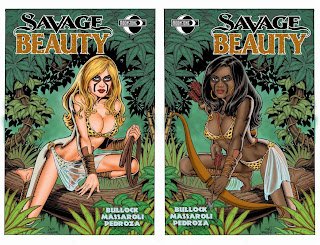 Mike Bullock: Savage Beauty is a myth, a legend born long ago and whispered down through the ages of the goddess Anaya. The dual divinity of Anaya takes form as either a golden beauty who blesses the faithful or an ebon angel who brings punishment to evil men. For centuries, many worshipped Anaya, and she protected her followers from colonial empires, slaver traders, poachers and the like who sought to exploit her people. Then, suddenly around the beginning of the 20th century, the goddess simply vanished.

Now, as her people cry out for justice Anaya has returned as suddenly as she left. Woe unto those who would visit evil upon her people.

AP: What were your inspirations/influences for SB?

MB: Everything from current world headlines out of Uganda, the Sudan, D.R. Congo and Somalia to a variety of mythology rooted in cultures of Eastern and Southern Africa.

AP: Why, Mike? Why a jungle comic in this modern market? What about SB will make it stand out with today's readers?

MB: Ed Catto and Joe Ahearn enjoyed what I was doing in the pages of Phantom and had a desire to work with me on a new book. At the same time, Ed also had an affinity for the jungle girl comics and pulps of old, but didn’t want to do one unless it was fresh and real, not “just another pretty face”.

After Ed and Joe batted a few ideas back and forth they came to me and asked if I could do what I was doing in Phantom but with a new character, a jungle girl character. There's only one rule: it has to be relevant.

The idea intrigued me, and since I really didn’t feel I’d yet scratched the surface of what I wanted to do with Phantom, they had me hooked before they were even done pitching it. I then spent the next few weeks pouring through all sorts of African mythology, which is
incredibly interesting and highly recommended to anyone who likes mythology of any sort, and I cobbled together the myth of Anaya from two or three existing mythologies. One thing I found fascinating is that there are over 1000 languages spoken in modern Africa, yet only a handful of mythologies exist through all these cultures; shared
mythologies that transcend languages, borders, regions and ethnic boundaries.

Anyway, I digress. So, I took that mythology and used it to flesh out the two main characters, Lacy and Liv Ray. I then created a back-story that would give them a reason to be in Kenya, to witness firsthand what you don’t really see on the nightly news. Then, I brought in a shadowy organization that has its own agenda in all this. Once all the
groundwork was in place, it was back to cruising along just as I was with Phantom. Anyone who enjoyed the Invisible Children or Checkmate arcs, will find more of the same in the pages of Savage Beauty.

AP: Where does the goddess Anaya come into play?

MB: Well, the girls become the avatars of Anaya, protecting her people and dishing out healthy doses of smack-down on those who would exploit them.

AP: Tell us about her supporting cast/characters?

MB: The first supporting cast member is the mysterious Mr. Eden, owner of Eden Holdings, LTD, a commodities importer/exporter. He was born in Uganda and used his incredible business savvy to go from the son of a local farmer to one of the world’s wealthiest men. I don’t want to say too much more about him, for fear of spoiling anything, but we’ll soon discover Mr. Eden is a lot more than just a rich businessman.

Next up are Lacy and Liv’s dad, Johnny Rae. Johnny’s an ex-action movie superstar turned film producer. After his first two films were worldwide hits, he and his wife “took the money and” ran to Kenya, where they planned to retire in comfort and raise their daughter, Lacy away from the materialism and moral depravity rampant in the US. Not
long after arriving, they found Kenya wasn’t the utopia they’d first imagined, and found themselves adopting Liv after rebels murdered her mother. They stayed in Kenya for nearly a decade before some venture capitalists and Johnny’s old movie company lured him back to the Southern California. He now runs Rae Gun pictures, which has a
mysterious connection to Eden Holdings, LTD.

AP: What about the villains? You can’t have a good comic story without villains, right?

MB: Glad you asked. The first to show their face are the PLA, a rebel army similar to the LRA, a real life army currently committing unthinkable crimes against humanity in D.R. Congo after having been run out of Uganda. The PLA is led by two men, the first we’ll meet is Lumus Okoye. Another we’ll see throughout the opening story arc is a French arms dealer simply known as Richaud, or The Frenchman, as the locals call him.

AP: What are the immediate plans for SB? Any hints into her upcoming adventures?

MB: the first story arc moves from Kenya, to Uganda and into D.R. Congo. After that, you can expect Anaya’s long arm to reach into Somalia, Mozambique and across to the US, Europe, the Middle East and elsewhere. 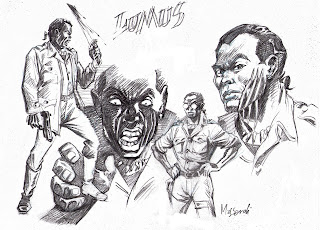