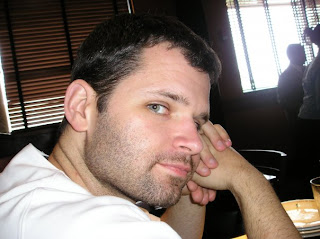 RA: A writer/editor/father/husband/bicyclist/amateur bear-fighter living in the Baltimore-DC area of these United States. In regards to what the readers of All Pulp might care about, he’s also one of the dudes behind the late Frontier Publishing and the editor of HOW THE WEST WAS WEIRD from Pulpwork Press. Furthermore, he enjoys talking about himself in the third person.
AP: What have you written and where can we find it?
RA: (Russ is disappointed to be abandoning third person already.)
I wrote “Mythworld”, a novel about Greek gods pressing for a comeback in the modern age, and the hijinks that ensue because of it. Mythworld appeared on the late Frontier Publishing website, but isn’t currently available. Maybe I should do something about that. Also, I wrote a short story called “The Origin of Flight” that appeared in a print superhero anthology that is no longer available called “Truth, Justice, And…”
So basically, you have to just take my word for it that I write. Oh! Except for my flash non-fiction story, Little Beagle Puppy, which is still available on Flashquake at http://www.flashquake.org/archive/vol2iss3/.
AP: How did you get hooked up with Pulpwork Press?
RA: I’ve known everybody at Pulpwork for about ten years, so the real question is why it took me so long to get involved over there. Fortunately, when I had a project I wanted to put together for them, our prior friendship greased the wheels of progress a bit.
AP: What’s the story behind HOW THE WEST WAS WEIRD?
RA: I wanted to be part of the club over at Pulpwork Press for a while, but hadn’t been successful in carving out the time to write a long-form project in a long time. So I pitched How the West Was Weird as an anthology mainly as a way (a) to get a project going with those guys without having to spend a year writing a book, and (b) to reconnect with some of the writing buddies that I’d started to fall out of touch with since Frontier went under. To that end, the story submissions were invitation-only, and I only invited writers I’d worked with whose stuff I enjoyed.
I sometimes feel like I didn’t edit HOW THE WEST WAS WEIRD so much as hosted it, since it really was just an excuse to get a bunch of my pals together. Fortunately, the book has transcended my selfish reasons for creating it and become something I’m really proud of.
As for why I went with a weird western, there’s no story to that. I enjoy the mash-up of those two genres quite a bit, and it was different from anything Pulpwork was doing. So here we are.
AP: What’s your definition of a weird western?
RA: The western isn’t defined by its location so much as it is by its tropes. There are certain plot elements (life on a frontier, the cycle of revenge) and certain character archetypes (the mysterious drifter, the lawman) that make a story a western, regardless of where it’s located. I don’t think anybody would argue that “Seven Samurai” and “Outland” aren’t westerns, even though one’s set in feudal and one’s set on a moon of Jupiter.
The weird western basically takes those tropes and either presents them in an unusual setting, or adds elements from other genres into the western framework. The most popular seems to be the horror-western – those two just seem to go together like peanut butter and jelly – but I’m a big fan of the steampunk-western and the space-western myself.
AP: There are other weird western anthologies out there.  What makes HOW THE WEST WAS WEIRD special?
RA: Can I say “because it’s good”? Is that snarky?
Well, how about the fact that it’s wrapped in an extremely pretty cover by Jim Rugg, artist/creator of “Street Angel” and “Afrodisiac”?
Also, it’s awesome.
Next question.
AP: Do you think that the weird western is a legitimate genre that will be around for awhile or is it just a phase that’s going to fade out as soon as the next bright & shiny thing comes along?
RA: Genres don’t really go away, do they? They may get put back on the shelf as they fall out of favor, but they always come back. I don’t think the weird western is ever going to fully disappear now that it’s out of the box.
I think the question is misleading, since it’s not like the genre is setting the world on fire right now. There’s a biiiiiiigg gap between it and, say, the vampire teen drama, and I think that’s primarily based on Hollywood’s inability to get the weird western right. Whenever they try, we get stuff like the Will Smith “Wild, Wild West”, or “Jonah Hex” starring from The Goonies. And that’s fine, I think. In a few years, everybody’s going to be sick of vampires stalking high school girls and the weird western will still be chugging along just fine.
All that said… you have to remember that the weird western is really only about 20 years old, so eventually the unique aspects of it will start to seem less and less unique. I think as time passes, the “weird” elements will begin to define the genre that the story falls into, and you’ll start seeing weird westerns in sci-fi, horror, and fantasy anthologies. It will be treated as a subset of other larger genres rather than being its own thing. 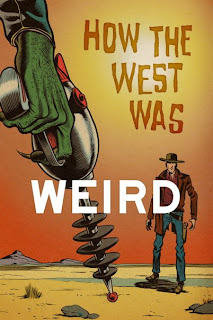 AP: There have been rumors of a HOW THE WEST WAS WEIRD 2.  Any truth to those rumors?
RA: Absolutely. A bunch of the guys who contributed to the first one have already promised me stories for volume two, along with some new faces. What’s more, I had a chance to talk to Jim Rugg at this year’s Baltimore Comic Con, and he’s on board for the cover too. I’m shooting for it to be twice as awesome as the first one, though I’m concerned about whether the binder can possibly contain all that.
I have no idea when it will hit the streets. I expect to be done with it by next spring, so we’ll have to wait and see when we can fit it in to Pulpwork’s publishing schedule at that point. Also, keep in mind that the last time we did this, my wife got pregnant halfway through, which added – no kidding – exactly nine months to the process. It should be out sometime during 2011, though.
AP: What other projects have you got in mind?
RA: I’ve got a 10 month old daughter, who’s enough of a project all by herself, thanks.
AP: Here’s your chance for a shoutout or to plug/pimp something.  Go.
RA: Buy HOW THE WEST WAS WEIRD. If you haven’t gathered as much from the rest of this article… it’s awesome.
AP: Any final words of wisdom?
RA: Like Linda Hunt said in Silverado: “The world is what you make of it, friend. If it doesn’t fit, you make alterations.”
Posted by All Pulp at 6:38 AM