From Ron Fortier reporting for All Pulp- 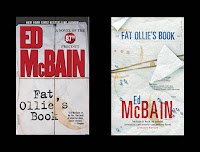 The widow of the late mystery writer Evan Hunter has sent out a batch letter to her husband's fans with some truly wonderful news.   Under the pseudonym of  Ed McBain, Hunter created a series of police procedural novels starring the fictitious 87th Precinct in 1956.  The books were quickly hailed by mystery fans as some of the best cop books every written.  There was a short lived TV series that only ran one season between 1961-62 starring Robert Lansing as Detective Steve Corella and Gena Rowlands and his deaf-mute wife, Teddy.  Several of the books were turned into feature films and made-for-tv projects; the most well known being FUZZ with Burt Reynold, Racquel Welch and Yul Brynner.  Hunter died in 2005, by then having won a Mystery Writers of America Grandmaster honorarium.  At the time of his death he had written over fifty 87th Precinct novels.

Now, Stanley Tucci and Steve Buscemi have optioned the books and formed a production team with Lionsgate films to develop them as a series for NBC.  The pilot script is being written.  This is fantastic
news for all pulp mystery fans.
Posted by All Pulp at 10:52 AM