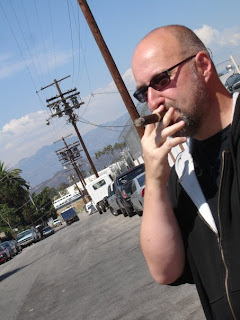 AP: Tell us a bit about Miracle Squad and Twilight Avenger and why this is the perfect time for these pulp graphic novels to return.
BC: Anyone who knows me knows that I love classic movie serials, poverty row thrillers and creature features - the great pulp movies. Back in 1987, I was in the USAF and stationed at Nellis, AFB in Las Vegas,NV. I used to frequent my local comic shop every weekend when I was home. Now imagine you’re me, die-hard pulp movie fan, and you walk into your comic shop and there on the shelf you see comics that not only look like classic movie serials, they read like them and they’re in glorious black & white. How could you not rush right over and throw them in your ‘buy pile’?

Even though it’s many years later, I still remember picking Miracle Squad and Twilight Avenger from that comic shop [Page after Page] and reading them cover to cover - even before I left the parking lot. Those two comics captured that wonderful energy and enthusiasm of the serials and were able to place it on the page, much like the way that The Rocketeer did.

For those of you who don’t remember: The Miracle Squad is the A-TEAM set in 1930’s Los Angeles. All of the characters work at a small poverty row movie studio, and when the studio is threatened with a hostile takeover by a local gangster they use their special talents to thwart him. It’s got stunts, special effects and of course - cliffhanger thrills aplenty. What really sets it apart though is the fact that these characters become a family of sorts. A family that wears disguises, escapes deathtraps, leap from airplanes, chase cars and takes the bad guys down, but a family nonetheless.

The Twilight Avenger is every pulp, golden age comic or serial hero you’ve ever heard of -- but done in a new way. You’ve got a young man seeking revenge against the mob who crippled his fiance; a mouthy lady reporter who always gets in over her head; a hooded villain called The Centipede (cut from the same cloth as Capt. Marvel’s serial nemesis The Scorpion) and plenty of henchmen who stand between our hero and his revenge. Add to that a cool gas gun, a magnesium chest lamp and you have a recipe for a steaming hot bowl of pulp chili. www.pulp2ohpress.com as well as out to our audience via our upcoming newsletter and Facebook page. 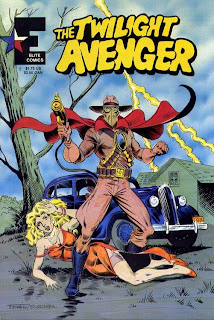 Pulp never goes away - so the idea that pulp is ‘returning’ is to my mind, something of a misnomer. Pulp is an attitude and it transcends the restrictions of the 1930’s and 40’s pulpwood magazine format it used to inhabit. In the 50’s and 60’s, “pulp” meant the cheap, lurid paperbacks or the outrageous EC comics. In the 1970’s it meant paperbacks with new heroes like The Destroyer, The Executioner and others. Pulp also meant that the classic pulps like Doc Savage, The Shadow and The Spider were being reprinted. The pulp attitude also migrated to movies and television: westerns, science-fiction, crime and ‘spy-fi’ owe a lot to the pulps. In the 80’s John and Terry were able to capture that essence and place it in their comics.

Thanks to technology, Pulp 2.0 is taking readers back to our pulp roots - entertaining popular fiction distributed and marketed inexpensively to our target audience. MS and TA are books that are going to appeal to fans of Indiana Jones, The Rocketeer, Golden age comics, movie serials, old time radio - the works. They ARE just that much fun, and we know there’s an audience out there that is hungry for fun when it comes to their comics entertainment. Now they can find these books, read them and most of all - ENJOY THEM - without having to pay Ebay prices.

AP: In the age of “remastering” material before it is repackaged, will these books be run as is or are they being updated with new colors, or tweaking things?
BC: These two separate series have never had the ‘graphic novel’ treatment. Their issues were originally supposed to be in color, but each publisher yanked the color after the first issue. Since each of these titles mimic the black & white films of yesteryear, I thought it would be best to republish them as exactly that and not mess with color. That isn’t to say that in the future we won’t try color - but right now it’s cost prohibitive and would stand in the way of our placing these great stories in the hearts of readers.

We will be collecting them as graphic novels and releasing them in that format. You will get complete stories with each volume. Whether you read these for digital or print, all of the images are going to be taken from the original artwork wherever possible and optimized. That means I’m sitting down with the scanner and Photoshop and cleaning up each page of artwork so it’s clear, crisp and dynamic. It will look good on your screen or in your hand. 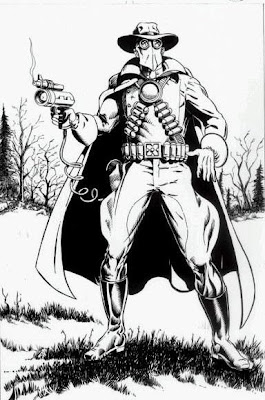 Because we take a stylized pulp approach to our books there will be details and design you never saw in their original floppy magazine editions. Things like full color covers, bonus content features, behind-the-scenes material and so on. In this way all of our print editions are like BluRay Special Editions - worthy of displaying on your bookshelf.

AP: As with Pulp 2.0 Press’ other offerings, Miracle Squad and Twilight Avenger will be offered via digital and print distribution. In what formats will readers be able to purchase these books?
BC: As always our digital books are designed and distributed to be as cost effective and accessible as possible. You will be able to get a full trade paperback book - well over 100 pages - on your digital device for only $2.99. That’s cheaper than a current single issue of a 32 page comic. We do that because we know what it’s like to hunt for a lost classic - only to find it online for a small fortune. Our job is to get cool pulp entertainment into your hands as quickly and inexpensively as possible so you can enjoy it. Right now our digital components include: downloadable PDF’s and Kindle versions (which can be read on PC, Mac, Kindle, IPad, IPhone and Blackberry). We will be following this up with an epub version which can be read on a variety of other types of devices.

We are partnered with Createspace for all of our print editions. They do black & white print really well and I am eager to challenge them with the design for this project. It will be a larger trade size (8 x 10) that will showcase the art in a new pulpy way. Fortunately for me, Terry did a great job originally composing his art for black & white reproduction so that makes my design job that much easier.

AP: Are there plans to tell new stories with Miracle Squad and/or Twilight Avenger after these new editions are released? 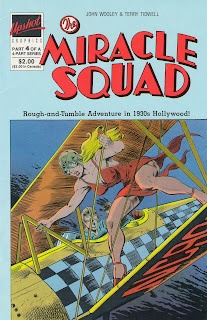 BC: Never say never. If the audience demands it - we’ll try and satisfy that need. I always have a few tricks up my sleeve, but for right now it will be very satisfying to get these books in front of their audience. I read recently that Robert Kirkman’s Walking Dead is going from a series of graphic novels to prose. I think that’s a great idea and I want to explore more transmedia experiences like that especially with properties like Miracle Squad, Twilight Avenger or my own The Knightmare (who’s already starred in his own radio serial with Decoder Ring Theatre) Remember: Pulp is not a medium - it’s an extra large!
AP: What type of bonus “behind-the-scenes” features can we look forward to for the print editions?
BC: We are still in the design phase of the project - the ink is still wet on the contracts after all - but I can say that we’ll be including all of the original extras like John’s essay on the poverty row cinema of the 30’s, an original story, as well as some other pulp cinema-related surprises. I sent the art direction document to Terry the other day and I think we’re going to have some great brainstorming sessions coming up with something that will capture the essence of these books.

And as always we’ll be making limited edition cover proofs available for fans who send us pictures of themselves with the book once it comes out in print. 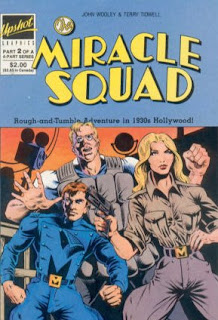 As soon as we nail down some of our design choices and have a cover, the information will go up on our website

AP: What other books can readers find from Pulp 2.0 Press?
BC: This October we will be releasing Radio Western Adventures - our tribute to radio, movie and tv cowboys of the airwaves - on Kindle. Then we will be releasing the first volume of our New Adventures of Frankenstein series in time for Christmas. Beginning in in 1st Quarter 2011 we will release Miracle Squad Volume 1 for Kindle. Long before that we will be releasing promotional material so you’ll know exactly how cool this book really is - an online preview of the book’s first chapter, a good look at the cover in full color, and whatever other goodies we can think up for you to download and place on your blog or website.

Of course, we currently have our debut book Brother Blood available in both ebook and print editions.

BC: I have plans in 2011 to announce more comic and pulp reprint titles, Kindle-only pulp specials and other cool stuff. We are a company that creates, develops and publishes pulp and comic BOOKS - no matter what their form. I am open to pursuing stuff I think is cool and that I think my readers want to see.

There’s a lot of great material out there that deserves to be seen and read by this generation so they can enjoy it as much as our grandparents, parents and we did. We have our work cut out for us.

AP: Are there any upcoming convention appearances or signings coming up where fans can meet you and pick up copies of Miracle Squad and/or Twilight Avenger?
BC: We have been taking baby steps through this first year of our existence. We’ve only done a couple of appearances here and there and really are trying to test the waters to see where we swim best. I will be announcing a 2011 appearance schedule that allows us plenty of face time with fans.