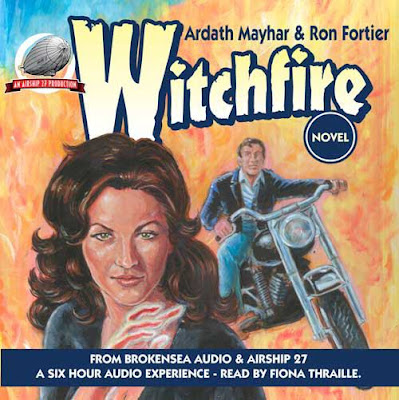 Airship 27 Productions, in conjunction with Dynamic Ram Audio, is thrilled to announce the release of the new audio recording based on the stories of the Airship 27 release, WITCHFIRE by Ardath Mayhar and Ron Fortier. Read by Fiona Thraille.

About Witchfire:
As a young child, Morgan Rein was taught by Mother Kalavela the curative powers of White Witchcraft. Ancient arts and skills employed in the service of mankind. The greatest of these elemental talents is the ability to control fire.

Now, from out of her tortured past, comes a deadly threat in the form of a psychotic warlock bent on murder and destruction. A cruel, sadistic soul who also happens to be her brother.

It will take all of Morgan's arcane skills, and the aide of a wisecracking cynical scientist, to combat the Dark Forces unleashed against her. To survive she will have to summon the purest flame of all, Witchfire!

A beautiful white witch uncovers a dark power threatening her city and her only ally is a skeptical scientist. Together they battle a sadistic fiend in this romantic thriller by Ardath Mayhar and Ron Fortier. Our first ever audio book brilliantly read by Ms.Fiona Thraille. Available now at our on-line website. Perfect for those holiday drives or daily commutes.

Witchfire is also available as a paperback here and at Amazon and as an ebook here.

Posted by BobbyNash at 4:13 PM