FORTIER TAKES ON 'THE BLACK BADGE'! 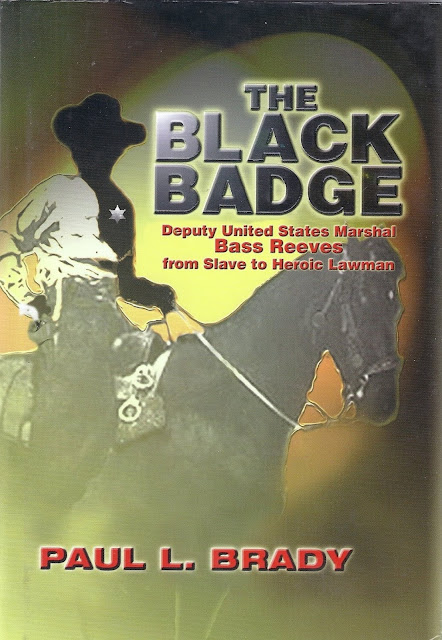 At the age of sixteen years old, runaway slave Bass Reeves left the Texas plantation where he had been raised and fled into the Indian Territories.  There he lived with the Five Civilized Tribes and fought with the Creek and Seminole on the side of the Union in the Civil War.  After that conflict, Reeves married and started a horse ranch.  Shortly thereafter he was recruited by Circuit Court Judge Isaac Parker to become one of the first ever African American Deputy U.S. Marshalls.  In his thirty-two years as a lawman, he achieved one of the most impressive records ever recorded in the annals of west.  He captured well over three thousand felons, was involved with fourteen major gun-battles and was only  wounded once.  An expert marksman with both carbine and pistols, Reeves was also a formidable tracker who knew the frontier lands like the proverbial back of his hands.

The tragic irony of his life is that as an adult, he served the law believing it would forever change the plight of minority groups for the better.  And it did just that in the Indian Territories where Judge Parker treated all felons to the same justice with no regard to their sex or race.  But when the Federal Government moved in by the late 1890s to accept Oklahoma as a state, it opened the floodgates to allow white settlers to swarm the land like human locust.  Most of them were racist; having no desire to share the bounty of the frontier with either the red or black man.  Caught in the middle, lawman Reeves watched the newly formed state enact equal-but-separate laws that were the legal antithesis of the Emancipation Proclamation and by the time of his passing in 1910 at the age of 72, racism was fully entrenched in Oklahoma.  And with that white supremacist mentality in place, is it any wonder that the remarkable life and career of this man were purposely expunged by white historians chronicling the history of the west?

Thankfully the indomitable spirit of freedom and justice prevailed and by the sixties the Equal Rights Movement swept across the land correcting those injustices once and for all.  With that came two authentic histories of Bass Reeeves.  “The Black Badge,” written by Paul Brady, a respected Federal Administrative Law Judge serving 25 years on the bench and the grand-nephew of Bass Reeves was released in 2005.  It preceded “Black Gun, Silver Star” authored by Prof. Art T. Burton published in 2008.  Both books are excellent and worthy of your attention.  Whereas Burton’s is definitively more complete and scholarly account, Brady’s is wonderfully full of personal anecdotes handed down to him by his elder relatives, many of whom actually knew Bass Reeves personally.  It is interesting to note there are several major discrepancies concerning Reeves younger days in regards to his parentage and name.  None of which is surprising considering the lack of personal records afforded slaves save for very few property accounts found on plantations after the Civil War.

Basss Reeves was the greatest lawman who ever rode the Wild West.  His adventures are legendary and all the more fantastic because they were all true.  If, like this reviewer, you grew up fascinated by the stories of Wyatt Earp, Wild Bill Hickock , Bat Materson and all those others made famous in books and movies, you owe it yourself to pick up this “The Black Badge” and meet the Bass Reeves.  It is an experience that will open your eyes and maybe even your heart.