FORTIER TAKES ON 'ONCE UPON A TIME IN AFRIKA'! 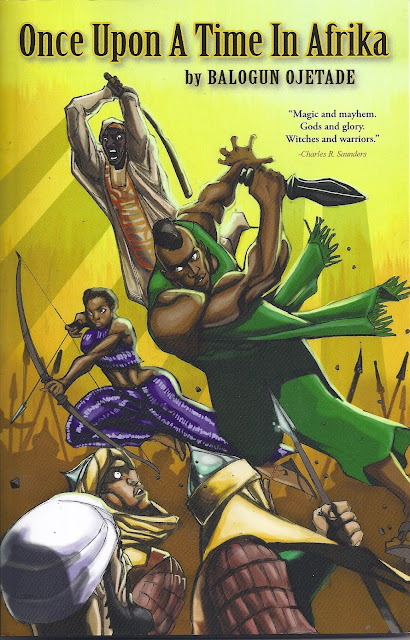 Since the advent of Sword & Soul, a subgenre focusing primarily on African mythology, we’ve seen many wonderful anthologies and novels come along that are breathing new life and welcomed vigor into fantasy literature.  The two biggest proponents, creators if you will, of this new classification are authors Charles Saunders and Milton Davis.  Saunders is known for his lifelong achievements in authoring some of the finest black fantasy fiction ever put to paper to include his marvelous heroes, Imaro and Dossouye.  Whereas Davis, beside his own amazing fiction, has been the driving force behind MV media, LLC, a publishing brand devoted to Sword & Soul.

Now, from that house, we have ONCE UPON A TIME IN AFRICA by Balgum Ojetade; a sprawling, colorful and fast moving adventure that defines the best of Sword & Soul.  It is a tale of whimsy, love, magic and war told with such comfortable ease as to pull the reader along effortlessly.  Now in all fairness, this reviewer was challenged to keep the many characters separate due to their exotic foreign names that twists one’s mental tongue in a variety of unique vowels and consonants.  Thankfully Ojetade does provide a glossary of names at the book’s conclusion which was most helpful.  Despite this minor annoyance, he does distinguish each figure in unique ways that did allow us to enjoy the action without getting overly concerned about proper pronunciations along the way.

Alaafin, the Emperor of the Empire of Oyo wishes to marry off his beautiful but mischievous daughter, Princess Esuseeke.  Seeke, as she is referred to, is very much a “tomboy” who prefers studying martial arts rather than learning sewing or poetry in the royal palace.  It is Alaafin’s prime minister, Temileke who suggest Alaafin sponsor a Grand Tournament to feature the best fighters in all the land brought together to battle for the hand of the princess.  The emperor approves of the idea and dispatches Temileke to the furthest corners of Oyo to recruit only the greatest warriors in the kingdom to participate.

Meanwhile, Seeke, frustrated by her role as the prize in such a contest, accidently encounters her father’s chief general, Aare Ona Kakanfo.  Or so she believes. In reality the person she meets wearing the general’s combat mask is actually Akinkugbe; a young warrior wishing to enter the contest disguised as the general.  When Akin manages to win Seeke’s heart, things start to get complicated.  All the while the real Kakanfo is commanding the forces of Oyo in the south against their enemies the Urabi, desert people whose singular goal is to conquer Oyo.

As the day of the tournament fast approaches, Akin is trapped having to maintain his disguise and somehow figure a way to defeat the other fighters to win the hand of the woman he loves.  While at the same time, the Urabi, unable to defeat Kakanfo’s troops, desperately recruit the services of a brutal demon and a deadly female assassin to help turn the tide of battle in their favor.

All these various plot elements converge dramatically at the book’s conclusion wherein Akin and Seeke not only must overcome overwhelming odds to be together but at the same time rally their people to withstand the calamitous assault of their fiendish enemies and save the empire.  ONCE UPON A TIME IN AFRIKA is a rousing, old fashion adventure tale that had me wishing Hollywood would pick it up and film it; it is that captivating an epic.  Ojetade is a writer worth taking note of, he delivers on all fronts and this reviewer has become an instant fan.
Posted by All Pulp at 2:34 PM