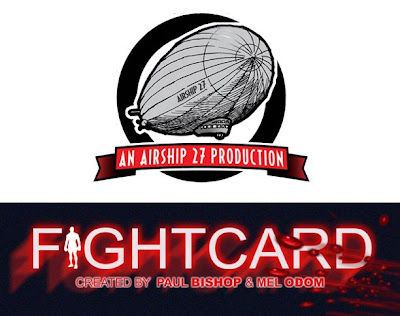 Terry Quinn was an enforcer for the Irish Mob in New York during the 1930s.  One of the toughest and the best.  But before he donned a trench-coat and fedora, before his life took the deadly detour leading him deep into the underworld, Quinn was an up and coming heavy weight boxer with a good chance at the title.

Created by author Terrence McCauley, Quinn’s story is about to unfold from two of today’s most popular pulp publishers, Airship 27 Productions and Fight Card.

Initially McCauley submitted his full length crime novel, “Prohibition,” to Airship 27 Productions’ Managing Editor Ron Fortier.  “It’s a tough, gritty fast paced gangster book,” related Fortier, “that reminded me of those classic black and white Warner Brothers movies of the 30s and 40s.  After reading the first few chapters, it was a done deal that we were going to publish this.”

“Prohibition,” by Terrence McCauley will be released by Airship 27 Productions in December.  The book will feature a cover and nine interior illustrations by artist Rob Moran, a creator noted for his noir inspired art with book design by Art Director Rob Davis.

But McCauley was far from done with Quinn.  As a writer, he was intrigued by Quinn’s backstory- how he became the man the underworld fears.  For this early story, set in Quinn’s days in the boxing ring, McCauley believed he knew the perfect target for such a story - the Fight Card series created by Paul Bishop and Mel Odom.  Each month since January 2012, the Fight Card series has published a new novelette from some of the finest action scribes in the field of New Pulp - all writing under shared pseudonym of Jack Tunney.  Each tale in the Fight Card series features a hard-hitting melodrama centered in the world of boxing inspired by the fight pulps of the ‘30s and 40s  - such as Fight Stories Magazine and Robert E.Howard’s two-fisted boxing tales featuring Sailor Steve Costigan.

Upon receiving McCauley’s inquiry, Bishop quickly approved it.  “I have been constantly amazed at the varied stories the Fight Card series has produced,” Bishop said, “And Terrence’s story featuring the origins of his Quinn character was another completely unique take on the mythology of boxing noir.”

McCauley’s tale of Quinn’s boxing days, “Fight Card: Against The Ropes,” will be published in January or Februrary of 2013.

As for McCauley, he couldn’t be happier.  “Even before Airship 27 agreed to publish Prohibition, I'd always envisioned my Terry Quinn character to be part of a larger body of work than just one book. That's why I was honored when Fight Card gave me the opportunity to tell of Quinn's beginnings with Fight Card:Against The Ropes. I'm honored that Quinn has found homes with both Airship 27 and Fight Card.  He’s also been featured in earlier short stories that have appeared in a variety anthologies.”

Airship 27 Productions and Fight Card are set to deliver a solid one-two punch knock-out that will have New Pulp fans cheering!

All Pulp has learned that Terrence McCauley’s Terry Quinn also appears in Atomic Noir, an ebook anthology presented by Out of the Gutter Online and NoirCon 2012. You can find it here.