THE FUTURE IS NOW! 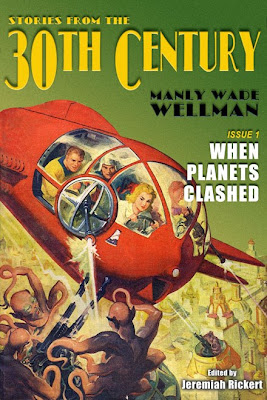 iPulpFiction.com and the Manley Wade Wellman Literary Estate are happy to present STORIES FROM THE 30TH CENTURY.

From the series editor, Jeremiah Rickert:

Welcome to Manly Wade Wellman's "30th Century" series! These stories, set in Wellman's shared "30th C." universe, were published sporadically between 1931 and 1951. An effort has been made to identify stories that have not yet been included the series by previous bibliographers.

The first two stories in the series, "When Planets Clashed" and "Disc-Men of Jupiter" are both in that category. "Clashed" was originally published in Wonder Stories Quarterly in Spring of 1931 and reprinted as a Hall of Fame Novelet in Startling Stories, March of 1947. "Disc-Men" originally appeared in the September 1931 issue of Wonder Stories and was reprinted in Startling Stories in May of 1947. I have included these stories in the series because their events are referred to in the past tense in the main body of 30th Century stories and they feature many of the main details found in all of the stories: Earth is governed by a "World League" based in St. Louis, Mars' capital is Ekadome and its pleasure city is Pulambar.

In "Disc-Men" we also have the first mention of the recreational "joy lamps" used by human and Martian pleasure seekers. There is a character named Thor Harvison who runs a ship manufacturing company on Mars. In 1943's "Frontier Planet" there is a Lt. Harvison who is the cousin of the Harvison Power interests on Mars. Additionally there is a character named Rolf Bromburg who may be the hero that Ft. Bromburg is named after in 1941's "30th Century Duel."

The main difference between these proto-30th Century stories and the others is the appearance of the Martians themselves. In these early stories they appear as lean mahogany-skinned humanoids and not the flower-headed speech-slurring blobs of fun we will read about as the series progresses.

Wellman's pulp stories hold up remarkably well and I am sure you will enjoy reading them as much as I have.