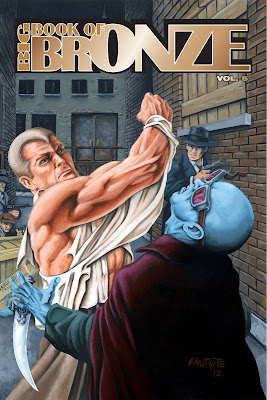 Well, at least in book form. The Big Book of Bronze #5 goes on sale November 23.

The Big Book of Bronze #5 will be released November 23rd on Lulu.com. At 282 pages, this tome of Doc Savage information, by the leading Doc Savage authorities of our time, holds insights into the Man of Bronze that you will be thrilled to read and ponder. In addition to the documentation of Doc Savage musings, you will find the must have companion to the new Jazz CD (Bronze Nemesis) by Scott Robinson about the music and his meeting with James Bama, the Ron Ely interview conducted in September where Ron discusses the movie in detail with Steve Ringgenberg, the detailed reflections of a meeting with Norma Dent by Dean Russell and an article by the current Kenneth Robeson: Will Murray.

Check out the great Doc Savage reading below and order your books in time for Christmas!

WHO IS FRED FORINO? by William Lampkin
HIS NAME WAS DOC SAVAGE by Fred Forino
WHO IS JACK JUKA? by Joe DeVito
COLLECTING ORIGINAL DOC SAVAGE ART by Jack Juka
WHO IS JAY RYAN? by Terry Allen
A GLEAMING SPIKE OF STEAL AND BRICK by Jay Ryan
THE RED DEATH'S ELEPHANT GUN by Jay Ryan
A FLOOR BY ANY OTHER NAME... by Jay Ryan
BULLETS OVER BROADWAY by Jay Ryan
WHO IS JEFF DEISCHER?
COMING DOWN OUT OF THE TREES by Jeff Deischer
WHO IS STEVE DONOSO?
THE BRONZE ARCHIVE by Steve Donoso
WHO IS MATT HIEBERT? by Lokke Heiss
FOUNDATIONS FOR DOC SAVAGE'S PHYSICAL DEVELOPMENT by Matt Hiebert
WHO IS JULIAN PUGA?
THE LAST REGISTERED DOC SAVAGE ADVENTURE by Julián Puga
WHO IS DAFYDD NEAL DYAR? by Allyson Dyar
DOC SAVAGE AND THE WORLD OF TOMORROW by Dafydd Neal Dyar
WHO IS COURTNEY ROGERS? by Pat Lilja
THE MYSTERY OF THE DOUBLE-USE PFEIFFER COVER by Courtney Rogers
WHO IS DEAN RUSSELL? by Jay Ryan
REFLECTING ON NORMA DENT by Dean Russell
WHO IS WILL MURRAY? by Matt Moring
MAN OF MIGHT by Will Murray
WHO IS SCOTT CRANFORD? by Wayne Skiver
THE ADVENTURES OF A BRONZE PAINTING by Scott Cranford
WHO IS JIM COX?
DOC SAVAGE AND THE ASIAN MARTIAL ARTS by Jim Cox
WHO IS RICK LAI? by Art Sippo
DOC SAVAGE AND THE CAGLIOSTRO LEGACY by Rick Lai
FIRST SIGHTING (Part Two) by Fred Forino
FIRST SIGHTING (Part Three) by Fred Forino
WHO IS DUANE SPURLOCK? by Chuck Welch
DENT'S HARD BOILED DOC: SATAN BLACK by Duane Spurlock
WHO IS TIM FAUROTE? by Bert Ehrmann
DOC SAVAGE: THE MAN OF...PLASTIC by Tim Faurote
WHO IS ARTHUR C. SIPPO MD, MPH? by Rick Lai
DOC'S LEGAL AIDE: AN APPRECIATION OF HAM BROOKS, ESQUIRE by Art Sippo
WHO IS SCOTT ROBINSON? by Michael Steinman
BRONZE NEMESIS: THE MAKING OF A MUSICAL ADVENTURE by Scott Robinson
WHO IS STEVE RINGGENBERG?
DOC SAVAGE SPEAKS: RON ELY! by Steve Ringgenberg

Learn more about The Big Book of Bronze series here.