FORTIER TAKES ON 'THE BAT STAFFEL' WITH G-8! 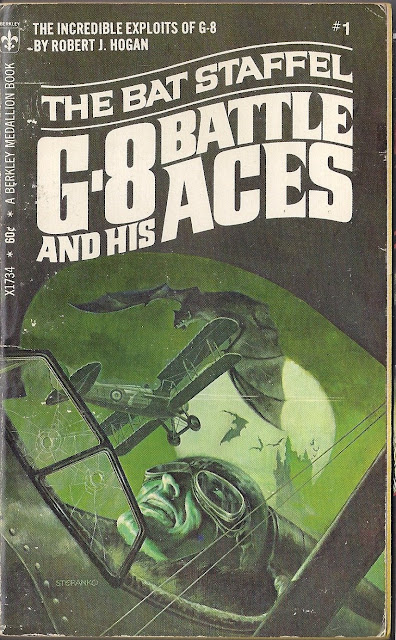 As most pulp fans know, back in the late 1960s and early 70s, many paperback publishers began reprinting the old classic pulp magazines.  The most popular of these reprint series were the Doc Savage books with the stylized James Bama covers and the Conan adventures as defined by master artist, Frank Frazetta.  Of course many other pulp heroes also received the paperback treatment as the fad caught on for several years introducing a whole new generation of readers to these classic figures.  Among some of the other heroes to find new life in the small softcover market were the Avenger, the Shadow, Operator 5 and the man known as the Flying Master Spy, G-8 And His Battle Aces.

Put out by Popular Publications, G-8 was one of many aviation heroes of the time to include Bill Barnes and Dusty Ayres amongst others.  Yet his magazine was the one with the longest run.  Debuting in October of 1933 it went to produce a whopping 110 issues; all of them written by Robert J. Hogan.  Another uniqueness with this title was the fact that Popular allowed Hogan’s name to be used. The habit of the pulps was to create a bogus house-name for a monthly series so that they could employ multiple writers, as most of them did, without the fans being any the wiser.  Not so with Hogan, who at the height of his career was writing three monthly books and numerous short stories to compile a staggering average of 200,000 words a month; a feat no other American writer has ever equaled.

Robert Jasper Hogan was the son of a Dutch Reformer minister born in 1897 and raised in Buskirk, NY.  A graduate of St. Lawrence University, before turning to writing full time, he was a cowboy, a boxer, piano player, pilot and airplane salesman.  Thus his realistic descriptions of G-8’s aerial combats have a ring of authenticity to them.  Hogan became friends with many veteran airmen who had fought in World War One and he based a great deal of his adventures on them and their exploits while at the same adding a heavy dose of the macabre.  Each of his G-8 adventures were an efficient blend of spy thriller, aviation adventure and horror fantasy.

Although aware of the character, I’d never read a G-8 story before and decided to correct that while attending this year’s Pulp Fest in Columbus, Ohio.  Luckily, with the help of pulp fan David Walker, I managed to find three of those Berkley paperback reprints including the very first G-8 novel, THE BAT STAFFEL.  It is a solid, rousing debut of the series introducing us not only to the mysterious G-8, whose true identity we are never to learn, but his colorful supporting cast to include his British valet, Battle and his soon to be arch nemesis, Herr Doktor Krueger, the Kairser’s number one mad scientist.  Krueger has developed a deadly poison gas that, when inhaled, turns its victims into piles of ashes.  The German air corps has built half a dozen flying machines resembling giant bats and fitted them with tanks to carry the deadly fumes.

No sooner does G-8 discover this plot then the Bat Staffel attacks a small French town and completely decimates it.  Infuriated by this merciless savagery, G-8 flies off to combat these bat-planes single handedly and is almost done in.  Fortunately he is saved by two American pilots who come to his aid.  The first is the small, happy-go-lucky Nippy Weston who has a penchant for magic tricks and practical jokes and then there is the former college All American Half Back, Bull Martin is a giant of fellow with a granite-like jaw and the heart of a kitten.

Loyal to a fault, Nippy and Weston, upon discovering they have just saved the famous spy, G-8, enthusiastically sign on to be his wingmen in his campaign to foil the Bat Staffel.  From that point on the three of them escape one dangerous death-trap after another, each using his flying skills and other abilities to stay alive and defeat their enemies.  THE BAT STAFFEL is a fast paced, truly imaginative glimpse back into the heyday of the pulps and a fantastic introduction to one of pulpdom’s all time greatest heroes.  Next time you’re at a pulp convention, follow my lead and hunt up copies of G-8  And His Battle Aces.  You won’t be disappointed.