MARK ELLIS TAKES UP THE CHALLENGE 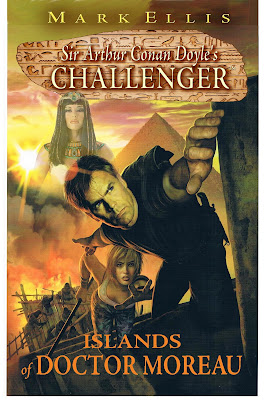 On his Facebook page, New Pulp Author Mark Ellis posted the cover and a tease about his upcoming project.

In a world almost identical to this one, all the characters from Victorian and early 20th century literature existed...there was Nemo, Sherlock Holmes, Moriarty, and even the War of The Worlds.

Some of the descendants of these famous--and in many instances, infamous--people carry on the work of their distinguished (and not so much) ancestors.

Two of these descendants are Professor Edward George Challenger and Major Loveday Brooke, operatives of the Diogenes Club, a freelance adjunct of MI6.

In ISLANDS OF DR. MOREAU, they face the terrifying threat of Sirocco Moreau, who has harnessed the secrets of selective mutation to give dominion of the Earth to the Akhakhu, neogods modeled after the ancient Egyptian pantheon of deities--with her as the immortal queen.

This is the first (hopefully) in an action-adventure series featuring the grandson of Sir Arthur Conan Doyle's Professor George Edward Challenger...it's a blend of Doc Savage and James Bond, with a pinch of Torchwood and a sprinkling of The Avengers and The Man From UNCLE.

I'm having a lot of fun working in this universe, so by following Rex Stout's dictum, everybody should have a lot of fun reading it.

I'll have more details about the release date soon.

And we’ll share that here on All Pulp when it becomes available.

Posted by BobbyNash at 7:49 PM