FIGHT CARD PUTS UP ITS DUKES! 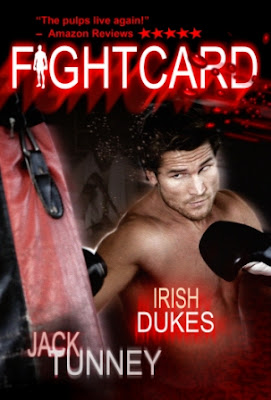 The latest Fight Card novel, Irish Dukes, is now available as an ebook with a paperback to follow shortly. Fight Card’s Paul Bishop shared the following press release with All Pulp.

Set in Ireland in 1951, Fight Card: Irish Dukes is the second novelette in the Fight Card series to feature an international setting (after the Australian set Fight Card: King Of The Outback).

The name behind the Jack Tunney pseudonym for this entry in the Fight Card series is award winning author Mike Faricy.  Bombshell is Faricy’s most recent novel released under his own name.  Currently, this series entry is available as a downloadable e-book with a paperback version to follow shortly.

Learn more about the Fight Card series at www.fightcardbooks.com.

Posted by BobbyNash at 8:48 PM