Moonstone Books has released their solicitation information for their pulp titles appearing in bookstores and comic book shops March 2013. These titles are available now for pre-order through your favorite bookseller.

By the author of The New Destroyer, the Adventures of Remo Williams! Who is the Red Menace? In the 1950s, the mysterious masked figure was a shadow and a whisper in Cold War corridors from Moscow to Beijing. Where walked the Red Menace, America's enemies knew fear. And death. Then in 1960 the whisper grew silent. Twelve years later, Patrick "Podge" Becket thinks he's escaped the spy game for good, but into his restless retirement steps a ghost from his past; a bitter Russian colonel with nothing to lose and the means to wreak worldwide destruction. Aided by brilliant inventor and physician Dr. Thaddeus Wainwright, the Red Menace is reborn for a new generation. But it's a whole new world out there, and if he doesn't watch his step the swingin' Seventies might just find him red and buried!
256 pages, $6.99. 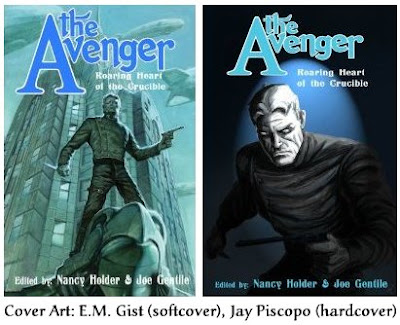 The greatest crime-fighter of the 40's returns in a third thrilling collection of original action-packed tales of adventure, intrigue, and revenge. Life was bliss for millionaire adventurer Richard Henry Benson until that fateful day crime and greed took away his wife and young daughter...and turned him into something more than human.

Driven by loss, compelled by grief, he becomes a chilled impersonal force of justice, more machine than man, dedicated to the destruction of evildoers everywhere. A figure of ice and steel, more pitiless than both, Benson has been forged into an avatar of vengeance, possessed of superhuman genius supernormal power. His frozen face and pale eyes, like a polar dawn, only hint at the terrible force the underworld heedlessly invoked upon itself the day they created...The Avenger!
Softcover, 314 pages, $18.95.
Hardcover, 330 pages, $32.95.

Collecting issue #1 and the only-available-in-hardcover issues #2 and #3! Ripped from today's world news comes a re-imagining of the classic jungle girl genre debuting a new hero for the modern age! Join the Rae sisters, recent UCLA grads, as they travel across modern-day Africa finding their place and making a difference. Guided by the mysterious Mr. Eden, they assume the identity of a mythical goddess and reveal their Savage Beauty. Mike Bullock presents a fresh new spin on the genre, featuring real-world conflicts in Africa and beyond.
74 pages, $11.99.

Learn more about Moonstone Books at www.moonstonebooks.com.
Posted by BobbyNash at 2:00 PM