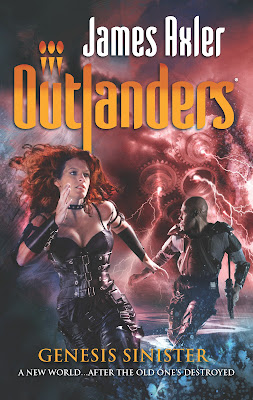 The new world is coming -- at the expense of our own.  But when the blood-soaked birth of the new age begins eating up all of existence it's up to the heroes of the Cerberus operation to hold back tomorrow and save the world they know.

This volume of the modern-day pulp sci-fi series is written by Rik Hoskin and opens a dangerous new chapter in the lives of the heroes.

About the author:  Writing as “James Axler”, Rik Hoskin has been the primary author of the Outlanders series since 2008 as well as contributing several volumes to James Axler’s Deathlands.  He is also a comic book author and has written Superman for DC Comics, helped develop a successful Spider-Man series for Marvel Comics’ European licensor, Panini, and currently writes for Star Wars: The Clone Wars Comic as well as several younger readers titles.
http://www.fantasticfiction.co.uk/h/rik-hoskin/
Posted by All Pulp at 8:17 PM