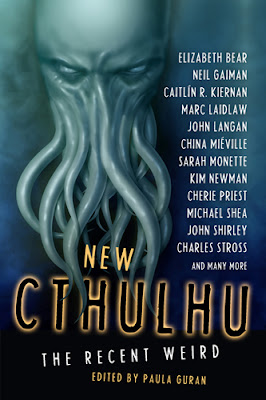 Prime Books’ New Cthulhu: Recent Weird anthology selected by Library Journal as one of the best science fiction/fantasy titles of 2012.

On the Prime Books site, they posted about the honor. “We are pleased and rather gobsmacked—if delightedly so—that New Cthulhu: The Recent Weird has been selected by Library Journal as one of the best sf/f titles of the year. Congrats to all the authors whose outstanding work made it such.” Plus, they couldn’t pass up the opportunity to share some news. “We suppose this gives us a fine opportunity to announce we will be publishing Spawn of Cthulhu: New Stories Inspired by H.P. Lovecraft—an all-original anthology—edited by Paula Guran in 2014. (And no, I have not started soliciting yet.)”

About New Cthulhu: The Recent Weird-
For more than eighty years H.P. Lovecraft has inspired writers of supernatural fiction, artists, musicians, filmmakers, and gaming. His themes of cosmic indifference, the utter insignificance of humankind, minds invaded by the alien, and the horrors of history — written with a pervasive atmosphere of unexplainable dread — today remain not only viable motifs, but are more relevant than ever as we explore the mysteries of a universe in which our planet is infinitesimal and climatic change is overwhelming it.

In the first decade of the twenty-first century the best supernatural writers no longer imitate Lovecraft, but they are profoundly influenced by the genre and the mythos he created. New Cthulhu: The Recent Weird presents some of the best of this new Lovecraftian fiction — bizarre, subtle, atmospheric, metaphysical, psychological, filled with strange creatures and stranger characters — eldritch, unsettling, evocative, and darkly appealing . . .

Posted by BobbyNash at 7:00 PM