NEW BOOK! NEW STORIES! AND A CHANCE TO DIE IN PRINT!

Meteor House Press announces a wonderfully strange, wild new novel and and a contest! And even offers a free excerpt below!

The Abnormalities of Stringent Strange

The Abnormalities of Stringent Strange

The exploits of an apeman test pilot 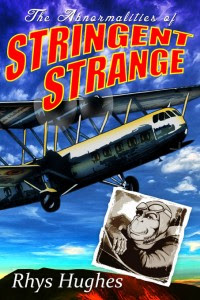 The world has never seen an aviator quite like Stringent Strange. Half man, half ape, half badly added fraction, he can fly anything with wings and many things without. Under the mentorship of the unorthodox genius Professor Tobias Crinkle, our hairy hero soon gets much more than he bargains for when he finds himself up against a fiendish Nazi plot to invade and conquer America before the war has even begun!

Fortunately there exists an invention that can help him fight back against the warlike scoundrels, but the consequences of using it will propel him into even greater peril, into an alternative future where the themes and tropes of early magazine science fiction are menacingly real and coexist in perfect disharmony! Into a bracing reality where the only weapons he can rely on are the three special abnormalities he was born with…
Come and join Stringent Strange in a stupendous, mysterious, inventive adventure set in a far-flung time When Pulps Collide!


In addition to buying the book, which will be a signed limited edition, customers can order a “deleted scene” which Rhys will write specifically for them. It will not appear in the book but will printed out from the “manuscript” and mailed with the book. In this (short) scene the reader will be killed by the author of their choice in the arena as they battle as gladiators. Here is an example: http://meteorhousepress.com/wp-content/uploads/2012/09/deleted1.pdf
Also, Rhys is currently writing a new novelette featuring Stringent Strange, “The Further Fangs of Suet Pudding,” http://rhysaurus.blogspot.com/2012/11/suet-pudding-returns.html. Everyone who preorders The Abnormalities of Stringent Strange, will get the ebook of “The Further Fangs of Suet Pudding” for free.
Anyone who orders a deleted scene before the end of November (Two days left!), will be Tuckerized as a character in “The Further Fangs of Suet Pudding.”
Go on a wild ride and learn all about THE ABNORMALITIES OF STRINGENT STRANGE! Start with the excerpt below!

Excerpt from
The Abnormalities of Stringent Strange

The Abnormalities of Stringent Strange, copyright © 2012 by Rhys Hughes
Posted by All Pulp at 4:17 PM