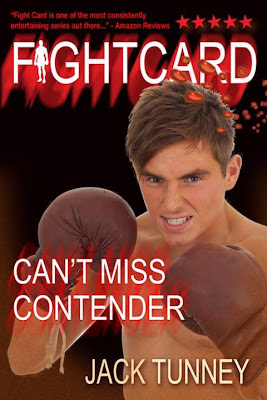 While Fight Card: Can’t Miss Contender is not a direct sequel to Kevin’s Fight Card: Hard Road, there is some minor character crossover.

Billy Flood was the kind of boxer who had ‘can’t miss’ written all over him.  He had the tools and talent to make him a middleweight champion.  But a few wrong turns changed everything.  Now, after a hard three year stretch inside the Missouri State Penitentiary, Billy is determined to get back in the ring and punch his way to the top. But, while other fighters his age have risen through the ranks, Billy is back where he started – fighting palookas, catchers, and tomato cans.

With his past on his heels and his future filled with obstacles, Billy finds himself backed into a corner by false friends and an unscrupulous promoter.  He may get his shot at becoming a contender, but will it cost him his future?  Can’t Miss Contender is another hard punching Fight Card tale...