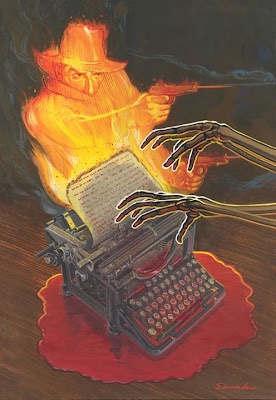 All Pulp congratulates Garyn G. Roberts on winning the 2013 Munsey Award, presented at the 2013 PulpFest convention.

Garyn G. Roberts has been named the winner of the 2013 Munsey Award. Nominated by the general pulp community, Garyn was selected through a vote by all the living Lamont, Munsey, and Rusty Award winners. The award is a fine art print by Dan Zimmer of a painting by David Saunders and is presented annually to a person who has worked for the betterment of the pulp community.

Garyn has worked in the field of higher education for many years, teaching English and popular culture studies. He is also an unabashed fan of the pulps. Garyn has written extensively about the pulps, both professionally and as a fan. He has edited or co-edited some of the best collections from the pulps including A Cent a Story: The Best from Ten Detective Aces, More Tales of the Defective Detective in the Pulps, The Compleat Adventures of the Moon Man, The Magical Mysteries of Don Diavolo, and The Compleat Great Merlini Saga. His insightful essays in these books and elsewhere have led to a greater understanding of the pulps both inside and outside of the pulp community. His collection, The Prentice Hall Anthology of Science Fiction and Fantasy, a college level textbook, is notable for the attention paid to the pulp magazines. Additionally, Garyn has helped other researchers with various pulp-related projects and is a regular attendee of pulp conventions where he often serves as a presenter and panelist. Last year's Munsey Award winner, Matt Moring, publisher of Altus Press, recently said about Garyn: "He's been nothing but helpful and outgoing with anything I've ever asked of him." That pretty much describes how Professor Roberts reacts to all the requests made of him by the pulp community.

Nominations are now being accepted for the 2014 Munsey and/or Rusty Awards. If you have someone in mind that you feel worthy of either award, please send the person’s name and a brief paragraph describing why you feel that person should be honored to Mike Chomko, 2217 W. Fairview Street, Allentown, PA 18104-6542 or to mike@pulpfest.com. Previous winners of the Lamont, Munsey, or Rusty Award are not eligible for the award. The deadline for nominations is May 31, 2014. Please visit the Awards page of the PulpFest website for additional details. Thanks for your help.

Posted by BobbyNash at 6:35 PM