THE ROCKET RANGERS NEED YOU! 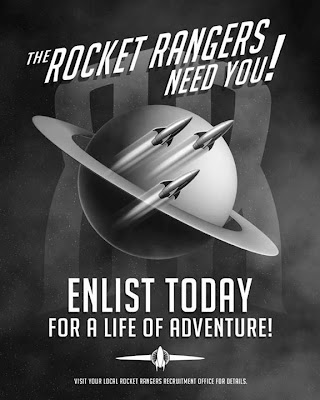 Cubicle 7 Entertainment has released a teaser image for their upcoming game, The Rocket Rangers.

"It's an alternate history pulpy retro-sci-fi space opera planetary romance. It's throttled up rocket packs burning radium on the long blast to the farthest reaches of the Solar System. It's hunting thunder lizards in the upland jungles of Venus. It's battling Ancient Martian killing machines piloted by the Deutsche Marserkorps across the baking red deserts of Mars. It's exploring the deadly skies of Jupiter under the constant threat of Europan disintegration. It's RAY gun wielding heroes bulls-eyeing mutants in the blasted ruins of Io" -Ken Spencer, Rocket Age Line Developer