From Borgo Press and Author Christopher Yates comes a new tale of adventure featuring the classic character from Argosy Magazine, THE NIGHT WIND! 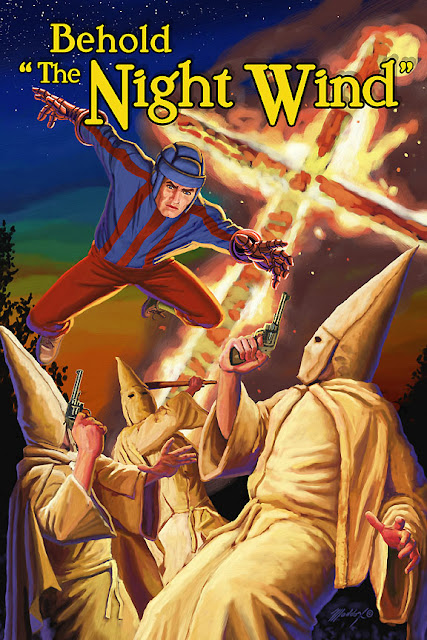 Borgo Press previously reprinted four Night Wind novels, edited by Yates.  The fifth book, entitled Behold 'The Night Wind' is a newly written tale of adventure by Yates as the next book in the series.  The book also features exquisite cover and interior artwork by noted artist Mark Maddox!

In the latest adventure of this classic character, Bingham and Katherine Harvard are polite, New York society.  He is an Ivy League graduate, heir to his foster father’s fortune, and successor to the presidency of New York’s Centropolis Bank.  She is the daughter of a United States Senator, scion of the Maxwilton family, the political dynasty of the Commonwealth of Kentucky.  Husband and wife reside at the sprawling Long Island estate, Myquest.

The Harvards’ elevated status in the social register is not high enough to avoid the clutch of crime.  Years ago Bing earned an alias, The Night Wind, in a bare-fisted brawl with the law in an all-sweeping revenge against false witnesses.  With five times the strength of an average man, Bingham prevailed.  Lady Kate was a prisoner in her own home, but sprang self-made man-traps in a successful bid at freedom.  Using sleuthing skills attained as a New York City police detective was no small advantage during her plight.  Together they have resolved to take the battle to the villain instead of awaiting fate to drop yet another scoundrel on their doorstep.

Aided by the United States Secret Service, and their valet, Julius, the Harvards race headlong into Westerville, Ohio.  A town dubbed the Dry Capital of the World and home of the Anti-Saloon League, the principal proponent of the successful drive for national prohibition.  But a half dozen speakeasies go up in flames in nearby Columbus, drawing in organized crime from New York to protect their business…until they too go up in flames.

Amidst this turmoil, United States Senator Warren G. Harding is conducting his campaign for President of the United States from the front porch of his home in Marion, Ohio.  His challenger for the Oval Office is the Governor of the State of Ohio.

History is being made in central Ohio this fall of 1920.  Will it be historically tragic or triumphant?

The ingredients for anarchy are in the bowl waiting to be stirred.

Be prepared to be blown away.  Behold, “The Night Wind!”