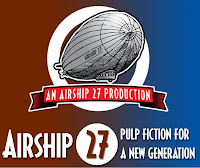 Michael Vance has been named Marketing Director for Airship 27 publishing.

“We are absolutely thrilled to have such a talented, experienced writer/editor joining our editorial staff,” declared Managing Editor Ron Fortier enthusiastically. “Michael Vance is one of the most respected pros in the literary community, and having him aboard brings that wealth of knowledge and creativity to Airship 27 Productions. Michael’s contributions are clearly going to allow Airship 27 to fly to new heights. Count on it.”

Vance's magazine work has been published in seven countries in magazines including Starlog, Jack & Jill and Star Trek, The Next Generation. He briefly ghosted an internationally syndicated comic strip, and his own strip, Holiday Out that was reprinted as a comic book. Vance also wrote comic book titles including Straw Men, Angel of Death, The Adventures of Captain Nemo, Holiday Out and Bloodtide. He is listed in two reference works, the Who’s Who of American Comic Books and Comic Book Superstars.

His thirty short stories about a fictional town called “Light’s End” were published in more than a dozen magazines, and have been recorded by legendary actor William (Murder She Wrote) Windom.

In his career, he worked in newspapers for twenty-two years as an editor, writer and advertising manager, creating three successful newspaper magazines. He also worked as an advertising copy writer, journalist, historian, graphic designer, in public relations, and as a grant writer. Vance also created the Oklahoma Cartoonists Collection housed in the Toy and Action Figure Museum in Paula Valley, Oklahoma, and was a keynote speaker at the Uncanny Adventures of Ookie Cartoonists exhibit at the Oklahoma Historical Museum in Oklahoma City.

AIRSHIP 27 PRODUCTIONS -
Begun in 2004 by comic book creators, Ron Fortier and Rob Davis, Airship 27 Productions is one of the leading companies of the New Pulp Movement; a concentrated effort to keep alive the classic pulp literature of the 30s and 40s while producing newer pulp themed titles by today’s brightest writers and artists. Today the company has over sixty titles, both novels and anthologies, in their ever expanding catalog and all their new titles are available digitally via Amazon’s Kindle. Employing their artistic sensibilities from their experiences in comics, Fortier and Davis has consistently produced the best looking new pulp books on the market today.

The company’s dirigible logo is emblematic of Ron and Rob’s high flying goals; to produce the finest quality books that are always fun to read, again and again.

Posted by BobbyNash at 3:52 PM