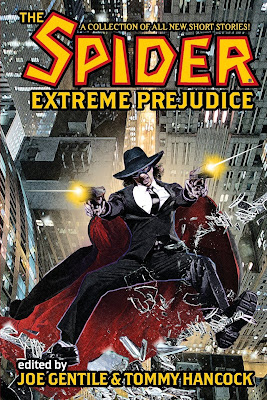 About The Spider: Extreme Prejudice:
New short stories of searing white-hot prose starring pulpdom's most violent and ruthless crime fighter ever: THE SPIDER! More just than the law, more dangerous than the Underworld...hated, feared and wanted by both! One cloaked, fanged, borderline crazy denizen of the dark force-feeding hard justice with a pair of 45's! Guest stars: The Black bat, The Green Ghost, and Operator 5!

You can learn more about The Spider: Extreme Prejudice here.

About The Spider:
More just than the law, more dangerous than the Underworld...hated, feared, wanted by both. Extreme sworn enemy of crime, The SPIDER clashes against super-criminals whom no one else can handle. He remains one step ahead of the law in his endless crusade to destroy the human vipers that nest in our society.

Posted by BobbyNash at 7:34 PM