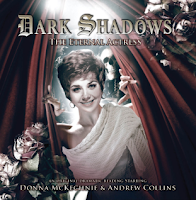 All Pulp congratulates the nominees and winners of the 2013 Scribe Awards.

The International Association of Media Tie-In Writers is pleased to announce the Scribe Awards for 2013 were handed out at Comic Con San Diego.  IAMTW congratulates the following winners:

In the Adapted Novel category: Clockwork Angels by Kevin J. Anderson, based on the album by Rush.

In the Audio category: The Eternal Actress by Nev Fountain, a Dark Shadows story.

Acknowledging excellence in this very specific skill, IAMTW's Scribe Awards deal exclusively with licensed works that tie in with other media such as television, movies, gaming, or comic books.  They include original works set in established universes, and adaptations of stories that have appeared in other formats and cross all genres.  Tie-in
works run the gamut from westerns to mysteries to procedurals, from science fiction to fantasy to horror, from action and adventure to superheroes.  Gunsmoke, Murder She Wrote, CSI, Star Trek, Star Wars, Shadowrun, Resident Evil, James Bond, Iron Man, these represent just a few.

Congratulations to the winners!

Congratulations also to author Ann Crispin who was named Grandmaster by the International Association of Media Tie-In Writers.