CAN THE DEAD MAN SURVIVE THE CRUCIBLE OF FIRE? 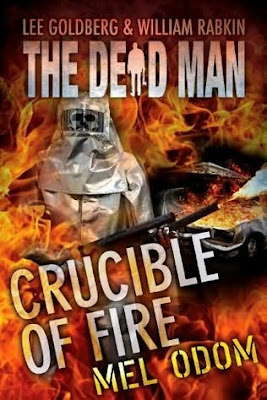 Best-selling author, Mel Odom chronicles the latest adventure of The Dead Man as Crucible of Fire ebook adventure is released.

About The Dead Man: Crucible of Fire--
Matt Cahill was an ordinary man leading a simple life until a shocking accident changed everything. Now he can see a nightmarish netherworld that exists within our own. Now he's on a dangerous quest for the answers to who he is and what he has become...and engaged in an epic battle to save us, and his soul, from the clutches of pure evil.
Matt Cahill is part of a team of smokejumpers who are dropped into the heart of a raging forest fire that is fueled by a flamethrower wielding madman under the sway of Mr. Dark. Almost every living thing in this hellacious inferno, including Matt's fellow firefighters, are falling prey to Mr. Dark's evil touch and bowing to his furious command: Kill the Dead Man!

The Dead Man series created by Lee Goldberg and William Rabkin.
Learn more about The Dead Man here and here and is available for purchase here.

Posted by BobbyNash at 1:30 PM