Reviews from the 86th Floor: Barry Reese looks at Howard Chaykin's The Shadow 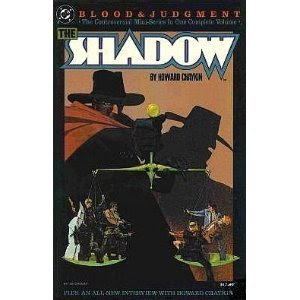 This was the era of Watchmen. Of The Dark Knight Returns. It was the boom of grim and gritty. Howard Chaykin, whose brilliant American Flagg! was already a modern masterpiece, was chosen to bring The Shadow back to life for DC Comics. He elected to bring the character into the 1980s rather than stick to being a period piece and he approached The Shadow with obvious knowledge but not necessarily a fan's reverence. He had no problem ramping up the sex and violence, while emphasizing the fact that The Shadow himself is a grade-A jerk.

We get to see Kent Allard's transformation into The Shadow, as well as he met Lamont Cranston, via flashback -- and we learn that the real Cranston is a major jerk. A jerk who still hates The Shadow, even in the 1980s. Killing off The Shadow's old aides in order to draw the mysterious vigilante back to the scene, Cranston is aided by a slutty secretary and an idiotic clone. He hopes to force The Shadow to take him back to the lost city where The Shadow gained his powers but he doesn't count on treachery in the ranks, nor does he realize just how dangerous his old enemy truly is.

Classic artwork from Chaykin and a story that hits on nearly all cylinders, this is one of my favorite pulp-to-comics transformations. Chaykin avoided being a pastiche by updating the character and refusing to place him on a pedestal. While the ongoing series by Andy Helfer that followed was a piece of steaming dog poo, this kick-off miniseries deserves a place on every pulp fan's shelf. It's proof that the classic pulp heroes can work in the modern day.