FORTIER TAKES ON AGENT PENDERGAST'S LATEST FROM PRESTON AND CHILD! 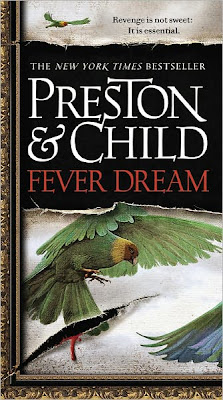 Since creating their unique modern pulp hero, FBI Special Agent Pendergast, writers Douglas Preston and Lincoln Child have miserly doled out small pieces of his background history.  The highlight of which seemed to be the monumental trilogy that depicted the battle with his demented brother, Diogenes.  Still there remains missing elements and with FEVER DREAM, the tenth book in the series, the pair once again sets about filling in those pieces.  At the offset we are introduced to Helen Esterhazy, the beautiful and brilliant woman who would be Mrs. Pendergast for an all too brief time only to die in a horrible hunting accident while on safari in .


Now, twelve years after that tragic event, Pendergast uncovers irrefutable evidence that Helen’s death was not an accident but murder, the result of a well orchestrated scheme but a merciless killer. A man of obsessive passions, once this information comes to light, Pendergast becomes a living dynamo set upon a singular quest; to discover the murderers and wreak his vengeance upon them.  To accomplish this, he recruits his long time friend and ally, New York police detective, Vincent D’Agosta much to the frustration of the cop’s lover, Chief Laura Hayward.  doesn’t trust Pendergast because of his unorthodox methods and is forever worried his recklessness will jeopardize D’Agosta career or worse, get him killed.
This time her fears are almost realized as the pair begin traveling the globe unaware their inquiries into this decades old mystery has made them the targets of a ruthless, professional killer. The non-stop action moves from the African bush to the bayou swamplands of the south making FEVER DREAM another solid entry into what has become this reviewer’s favorite modern pulp series.  As I’ve always preferred paperback editions to the hardbacks, my apologies for these reviews being somewhat late.  If you love great characters and truly bizarre story plots, the Special Agent Pendergast books should be on your must-read list.  Believe me, you will not be disappointed.
Posted by All Pulp at 2:38 PM