HANCOCK AND HIS HAT GO INTO 'THE BLEEDING HELLS'! 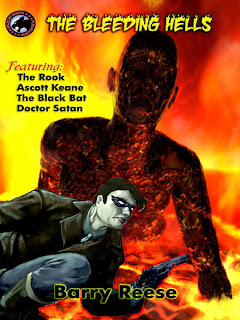 If you know New Pulp, then you probably know the work of author Barry Reese.  Even more likely you know the character Reese is best known for creating, THE ROOK, formerly with Wild Cat Books, coming soon from Pro Se Press.  Barry has made quite a name for himself by producing ROOK story after ROOK story, most of them collected in six total volumes with plans for three full novels to come over the next year or two. What you may not know about, though, is a little Reese gem that slides under most radars.  And not only is The Rook central to the story, but Reese with all his New Pulp skill and style reaches into the land of Classic Pulp and the Public Domain and adds a liberal dose of The Black Bat, Ascott Keane, and Doctor Satan into one bleeding helluva story that may be one of my favorite ROOK adventures.

THE BLEEDING HELLS focuses on The Knife of Elohim, a blade that is a major part of The Rook's arsenal.  This blade, once bathed in the blood of Christ, is blessed with supernatural energy.  Within this story, it turns out there were four such blades and two criminals have decided to collect all four and open up a portal into The Bleeding Hells, essentially the worst version of Lucifer's headquarters one could imagine.  It turns out that not only does The Rook have one of these knives, but The Black Bat has one and the infamous Dr. Satan has the other two.   The criminals of course end up getting hands on all four and our heroes...and yes, one incredibly evil villain...have to pool resources, set aside differences, and hope they can save the world, even if they already be too late.

THE BLEEDING HELLS is Reese's ROOK  at its best.  The characterization of Max Davies shows not only an avenger of justice, but a man troubled enough by his own past to fight like heck to insure the safety of the future.  Reese goes to a whole other level, however, within this tale than just putting his best Rook forward.  Once again, Barry shows an excellent grasp of what's come before and gives fantastic portrayals of THE BLACK BAT, ASCOTT KEANE, and a thoroughly chilling and enjoyable DOCTOR SATAN.  Other strengths shine through as well, including the pacing being dead on.  Barry builds the tension of the story well, even as he thrusts you immediately into the action.  Dialogue pops all the way through, from the smarminess of Satan to the back and forth charming dialogue between the various heroes' sidekicks.  In all ways Reese, this is one of the best efforts I've yet to see and definitely makes me want to see this collection of heroes and villains once again...and even twice.

The only drawback to this volume and unfortunately it's a significant one, is the editing.  It's not that there's a mistake on every page, but the misspelling and absence of words is enough that it proved distracting from the beginning to the end.  I thoroughly enjoyed THE BLEEDING HELLS, but I have also built up a tolerance to editing errors to a small degree.  Even with that, though, the editing or lack of it made THE BLEEDING HELLS a little more difficult to read than I would have liked.

FOUR OUT OF FIVE TIPS OF THE HAT-The editing is an issue for me, but to be honest, the story is just awesome enough to overcome it.
Posted by All Pulp at 10:08 AM