PULPS!- A Column by Mark Halegua
Continuing from the previous column-
During the next six years from 1917 through 1923 there was a further explosion in titles and publishers.
The titles ranged from short runs like Thrill Book, to long running weekly titles like Western Story, both by Street and Smith.  Western Story was the first all western title, renamed from a nickel paper, New Buffalo Bill Weekly.  For most of 20 years it was published weekly.  Street and Smith also published Love Story (another weekly) and Sport Story (twice a month for a long period).

Other important and long running titles in this period include Ace High (which later become Ace High Western), Action Stories, Black Mask, and Weird Tales.
The latter two were never best selling titles.  Weird Tales in fact, by many accounts, was hanging on by the skin of its teeth with bankruptcy never far from the door.
But, they were important far beyond their sales for what they published.  They were important for their impact on the pulps and later popular literature, for the authors and artists they introduced and the style of writing.

Initially Black Mask was created to help pay for another magazine with poor sales figures, The Smart Set – which was supposed to compete with the New Yorker.  It wasn't making money, but it was a prestigious title and so H. L. Mencken and George Jean Nathan decided to try publishing a pulp to help pay the bills.  This wasn't their first, having published Parisienne and Saucy Stories.
From the beginning Black Mask was a general fiction title.  One of many in the period.  It advertised on its covers Detective, Adventure, Mystery, Romance, and Occult stories.  Early issues also published westerns.  The quality of these early issues wasn't high but they sold the title for a huge profit from their initial investment. 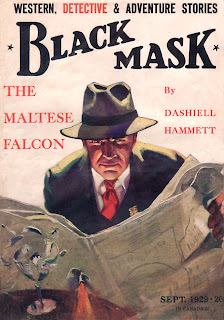 Still, it took the new publishers a couple of years before an editor took over who changed the face of the magazine and crime fiction forever.  Joseph “Cap” Shaw took over the reins in 1926 and decided that crime fiction should fit the times, gritty, direct, and powerful.  He was also in favor of justice and depicting criminals as cowardly and no account.
Even at this stage of the pulps, entering their third decade, crime fiction was still somewhat laid back.  No longer the drawing room mysteries of years earlier, but relatively soft.  Yes, you had gun battles, Private Investigators, police, criminals, but it was still didn't have the hard edge,  the punch it would have under the new editorship.
Under Cap Shaw that punch was delivered.  The stories started at a 60 miles per hour pace and just revved up, non-stop.  Shaw also realized Black Mask couldn't compete as a general fiction magazine against such titles as Argosy, Adventure, Blue Book, and Short Stories, among others.  Black Mask had to concentrate on detective stories.  It took awhile, but eventually detective was all it published.
In 1923 Carroll John Daly wrote his first story for Black Mask, titled “Three Gun Terry,” about private investigator Terry Mack.  He would write later stories about Race Williams.  Williams wasn't the first detective, but he was an uneducated, rough talking, rough acting individual, and always with something to say.  He was a street fighter and used his gun without compunction or remorse.  If he thought you deserved a bullet in the brain, you got it. 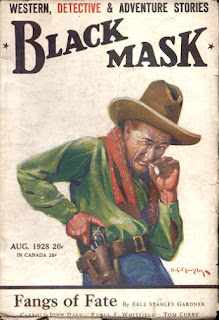 A year before Daly introduced Race Williams one-time Pinkerton agent, Dashiel Hammett, wrote about the Continental Op.  You never knew his name.  This first story, “The Road Home” appeared in the December 1922 issue of Black Mask under the name Peter Collinson.  In December 1923 Earle Stanley Gardner's first story appeared, “The Shrieking Skeleton,” under the pen name of Charles M. Green.  Gardner would later leave the Black Mask stable as he chaffed under the constant editorial hand of Shaw trying to shape all of his writers after Hammett.   In 1933 Raymond Chandler joined the pulp.
And so, with these and other authors, was born the hard boiled detective!
For 10 years Cap Shaw helmed Black Mask, and circulation grew.  Never a best selling title but one with great respect accorded to it.  How could it not with stories like the Maltese Falcon?
In 1923 Weird Tales entered the picture.  This was the first all fantasy and horror title.  Over its 30 year history it would change physical formats from pulp to bedsheet back to pulp and, finally, near the end in the 50s digest.

Covers were done by J. Allen St. John, Margaret Brundage, Virgil Finlay,  Hannes Bok, and others, these being the most notable.  Brundage's covers included whipping nude or semi-nude nubile young women.  Rumor has it she used her daughter as a model, and many decried the covers which, of course, brought more attention and more sales.
Never a best selling title, always on the verge of bankruptcy, its impact resonated beyond the pulp world.  One story, by C. M. Eddy, Jr., included necrophilia and forced the magazine's removal from some newsstands.  But, it also drew interest and sold well enough to stave off the bank. 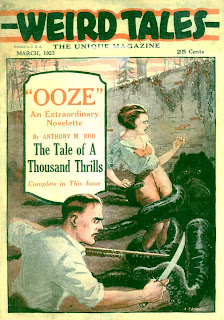 There have been several attempts to revive Weird Tales after its original run ended in 1954 and there is one now been out for a couple of years.  If you're interested in this number of current writers (Stephen King for one) have written for it.  Go to: http://weirdtalesmagazine.com
Otto Penzler has edited a huge (over 1,100 pages) compendium of Black Mask stories in the Black Lizard Big Book of Black Mask.
This book includes the original Maltese Falcon story, the first time seeing publication since its original Black Mask publication, it having been modified since that original printing.
Authors include Carroll John Daly and his Race Williams (against the KKK no less), Earle Stanley Gardner, Richard Sale, Raoul Whitfield, Dashiel Hammet (as Peter Collinson), Fredric Brown, and more.  All the stories come with the original illustrations.
You can find this book at most bookstores and on Amazon.
All of the images are from my Pulp Image Library version 7 disk, on sale at pulps1st.com.
Posted by All Pulp at 12:36 PM