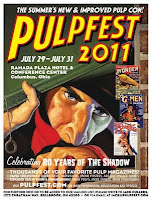 "PulpFest 2011 is pleased to announce that FarmerCon VI will be held concurrently at our convention. An annual gathering for fans of Grand Master of Science Fiction Philip José Farmer, FarmerCon is rooted in Peoria, Illinois, the late author’s home town.

It all started soon after Phil had won the Grand Master award at the 2001 Nebula Awards ceremony. To honor the event, the Peoria Public Library staged a Living Legend Reception for the author. Farmer enthusiast Michael Croteau spread the word about the event through his website, The Official Philip José Farmer Home Page, resulting in fans coming to Peoria from across the country.

In 2006, no longer able to travel to science fiction conventions as they had done in the past, Farmer and his wife Bette decided it was time for the mountain to come to Mohammed. Thus FarmerCon was originally conceived to be a gathering of fans in Peoria, figuratively, and literally, right outside Phil’s back door. With programs, speeches, panels, dinners, and picnics at the author’s house, the convention quickly became a great success.

After the passing of Phil and Bette Farmer in 2009, it was decided to take FarmerCon on the road, giving fans of the author an opportunity to meet other Farmer devotees unable to travel to Peoria. And by holding FarmerCon alongside events like PulpFest, Farmer fans get a weekend full of programming (including several Farmer-related presentations on Friday, July 29th) and a room full of pulp and book dealers to enjoy. It also keeps Philip José Farmer’s name in the public eye, reminding fans of his long and amazing body of work.

Please welcome FarmerCon VI to PulpFest 2011. We hope they’ll be back again and again."

In conjunction, Meteor House will have a table in the PulpFest Dealer's Room, and I'll be helping man the table, along with my friend, fellow FarmerCon organizer, and Meteor House cohort, Mike Croteau.

As one of the organizers and participants in FarmerCon, I’d like to thanks the fine folks at PulpFest for agreeing to co-host us this year. This will be our 6th annual gathering, and the second since Phil Farmer and Bette Farmer passed away.
We will have some cool Farmer/Pulp/Wold Newton presentations for the programming, and we’ll have a selection of books still available from Phil Farmer’s estate, as well as some copies of the latest Farmer books for sale (last summer’s THE WORLDS OF PHILIP JOSE FARMER 1: PROTEAN DIMENSIONS, Meteor House), and the forthcoming THE WORLDS OF PHILIP JOSE FARMER 2: OF DUST AND SOUL, featuring new works from Phil’s files, non-fic essays about his work, new authorized fiction set in his various worlds, and cover art by Laura Givens.

Of course, I’ll also bring copies of my latest non-Farmerian books and will be selling those at our table as well. Fingers crossed I’ll have the forthcoming THE GREEN HORNET CASEFILES on hand, as well as THE AVENGER: THE JUSTICE INC. FILES. CROSSOVERS 2 was not out in time for last year's FarmerCon, so that's also something to keep in mind.
I’ll be discussing Phil’s pulp universe/timeline, known as the Wold Newton Universe, and hopefully I’ll have copies on hand of Titan Books’ reissue of Phil’s Sherlock Holmes-Lord Greystoke mashup novel, THE PEERLESS PEER, to which I’ve contributed a new afterword.
Some other regular FarmerCon attendees who I know will be there are my pals Art

Sippo, John Small, and Doc Savage/Shadow chronologist Rick Lai. Some other online pals who I'm looking forward to meeting in person are writer Greg Gick and All Pulp's Tommy Hancock.
Meteor House is also running a Book Bonanza for authors:

"If you are an author coming to FarmerCon VI, here is your chance to tell the rest of us which books of yours you have available. Then fellow attendees may request that you bring copies of certain books for them to purchase directly from you."

Follow The Official Philip Jose Farmer Home Page, Meteor House, BookTour.com, and this site for more details.
We’re looking forward to seeing everyone there!
Posted by All Pulp at 11:29 AM