Yes, Virginia, there was a SHADOW movie before Alec Baldwin (which, by the way, I enjoyed although many did not). Actually, there were three, all B movies turned out by Monogram Pictures in the 1940s.   'The Missing Lady' is the third entry in the series, but the first that I watched, so hence the review.

Now, for those not familiar with most movie adaptations of our beloved pulp types, they often usually go far askew of what we as fans are familiar with and enjoy.  This was true oftentimes in the days of early Hollywood, due in part to the inability to mimic many of the things that occurred in the written word, but also to often fit trends that were present in the movies at the time.  Not so different from today, this practice seems to be more prevalent in the 1930sand 40s, a period where 'film series' short 60-75 minutes movies were produced rather rapidly focusing on a central character.  The Saint, The Falcon, and The Lone Wolf are probably the best examples of 'detective/hero/playboy' types that dominated movie screens in the 1940s.   Monogram had an opportunity to jump into this genre with a totally different twist when it took on dramatizing Gibson's THE SHADOW stories.  Unfortunately, this ended up being a very much missed opportunity. 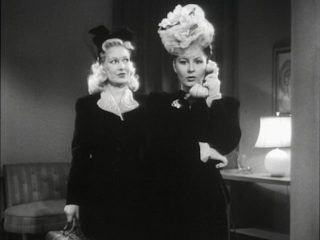 'THE MISSING LADY' opens with the murder of an art collector and the theft of a Jade figurine of a lady, the absent diva of the title.  It jumps immediately to a month later, and I mean immediately with the use of a newspaper headline saying the murder we'd just watched was a month ago, and a whole host of people searching for the statue.  Included in this cast of characters is playboy and amateur detective Lamont Cranston, the only person seemingly investigating the murder.  Cranston and his cab driving roommate Shrevvie, along with their vapid bumbling girlfriends Margo Lane (yes, Margo is a jealous goofball throughout the movie) and Jenny Delaney, feel that the series of murders following the first one in the film, are all tied into the 'Missing Lady.'  Throw in a police investigator that Cranston spars with for comedy, a list of two dimensional 1940 mystery stereotypes, and two kooky spinster sister elevator operators who have races in 'Upsadaisy' and 'Downsadaisy', their named elevator car and you have this movie.

Oh yeah, and Cranston becomes The Shadow twice and is the only person to ever mention his alter ego.

The acting was average for the most part for a B Movie from this period.  The storyline was convoluted, confusing, and way too crowded.   It was obvious that some characters, including the artist who lived in Cranston's building, were simply thrown in so there would be more suspects.  The attempts at comedy fell flat for the standards of the period and due to that, are particularly dated for modern viewers.   The resolution of the murders was pretty good concerning the very first murder, although it was telegraphed five minutes into the movie.  The resolution for the others, however, was just as throwaway as most of the characters. 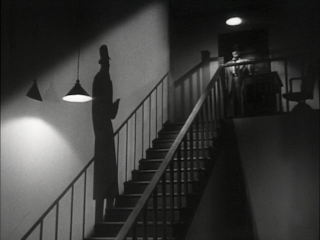 I did enjoy the way that they portrayed The Shadow the few times he was shown.  He was literally that, a black shadow in a fedora and something covering his face.  For the period, one particular effect was really cool.  The Shadow accosts a bad guy and grabs hold of him and the guy is pulled off screen.  The fight seen only in shadow added a little weight to the portrayal and had this continued in various ways, would have made this much more enjoyable.   Kane Richmond definitely fit the look for Lamont Cranston, but what was missing were many of the Shadow trademarks, like the creepiness and the laugh.   And let's not even talk about the waste of both Barbara Reed and Margo Lane.  Reed shows promise to be a good Margo in a couple of scenes, but the writing makes Margo more 'Lucy' than 'Lane' and it just doesn't work.

TWO OUT OF FIVE TIPS OF THE HAT-If you're a Shadow fan who feels like you need to see, read, or hear everything THE SHADOW is in, then you need to see this.  Or if you have no idea who the character is, but you want to point and laugh at the old movie, then this is also for you.  Other than that, go watch Alec Baldwin.
Posted by All Pulp at 9:19 AM