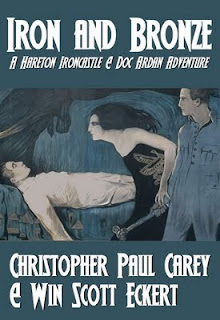 For a long time, my good friend and colleague Win Scott Eckert and I had been tossing around the idea of writing a story together. We had both been heavily influenced in our youth by the Doc Savage pulps, H. Rider Haggard, and Jules Verne (among others), and each of us had completed novels begun by Philip José Farmer. Win's collaboration with Phil, The Evil in Pemberley House, came out in 2009, and mine, The Song of Kwasin, lined up behind Up the Bright River (a wonderful collection that came out to commemorate Phil's long and wildly imaginative career following his passing), and is slated to be published in an omnibus of the Khokarsa series in 2012. So it only seemed natural that we should write a story together ourselves someday.

That opportunity finally came with the story "Iron and Bronze," which was first published in 2009 by Black Coat Press in the anthology Tales of the Shadowmen 5: The Vampires of Paris (a terrific anthology and series that I highly recommend to pulp adventure enthusiasts), and which features two great heroes of the French pulps. Now the story is available in ebook format for both the Kindle and Nook. Here's the product description:

Taduki-inspired visions draw an intrepid adventurer and a madman to a lost African outpost of Atlantis where they must confront an ancient mystery from the stars... Drawing on diverse sources such as Jules Verne’s The Barsac Mission, H. Rider Haggard’s She and Allan, Guy d’Armen’s Doc Ardan (who has been called the “French Doc Savage”), J.-H. Rosny âiné’s L’Étonnant Voyage de Hareton Ironcastle, Pierre Benoit’s L’Atlantide, and Philip José Farmer’s “monomyth,” “Iron and Bronze” hearkens back the classic SF adventure pulps of the 1920s and ’30s.

This story first appeared in the anthology Tales of the Shadowmen 5: The Vampires of Paris.

Christopher Paul Carey is the co-author with Philip José Farmer of The Song of Kwasin, the third novel in the Khokarsa series (omnibus forthcoming in 2012 from Subterranean Press).

Win Scott Eckert is the co-author with Philip José Farmer of the Wold Newton novel The Evil in Pemberley House, about Patricia Wildman, the daughter of a certain bronze-skinned pulp hero (Subterranean Press, 2009).

So if that grabs you, you can begin reading "Iron and Bronze" right now on the Kindle or Nook platform of your choice.
Posted by All Pulp at 12:55 PM