Reviews from the 86th Floor: Barry Reese looks at The Last Phantom 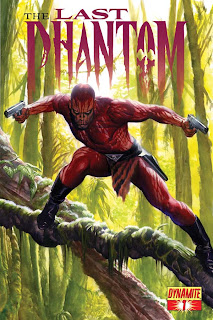 Like many hardcore Phantom fans, I was disappointed when Moonstone lost the comics license. They had handled the character very well over the years, managing to both pay respect to his origins while also updating him to the 21st Century. When images began to filter out about the Dynamite version, complete with a new look, a more violent tone and a potentially revised origin, I was not pleased. So now I've finally gotten around to reading the first trade... and I have to say, it's not bad.

In this story, the 22nd Phantom (not the 21st who is seen in most Phantom materials) has decided to retire the family business. He still plans to save the world but he's doing it through philanthropy, not firearms. But someone close to him has motives that aren't so pure and they arrange for Kit Walker to die in a plane crash, at the same time as his wife and son are murdered. Kit survives, learning that his family's legacy of death isn't one that can easily be broken. The bizarre look featured on the cover and in promotional images is actually a temporary one, used while Kit is recovering his Phantom gear. He does update the suit, using one now that can bend light around it so he appears to be a literal ghost. From the point at which Kit returns to the suit, things are much more traditional, though the violence is still raised a notch over the usual Phantom fare.

The art ranges from great to simply serviceable but for the most part it's dynamic and tells the story well. The story is good and actually seems like a good way to update The Phantom to a modern audience: it wouldn't make a bad movie. I hated to see Kit's wife and son die (it's so cliche) but it certainly sets the tone and explains the title (though Kit looks young enough that there could be more heirs in his future).

Was this so good that it makes up for losing the Moonstone versions? No... but I do wish we could have somehow had both on the stands. This is a smart updating of the mythos and if it hadn't been mismarketed to fans at the beginning, I think it would have been embraced more.