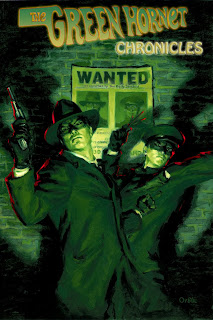 Another in Moonstone's excellent line of prose anthologies, this book features a number of stories about Green Hornet and Kato. The emphasis is definitely on the television version of the pair, though there is a story adapted from a radio script and various small nods and winks to other versions of the characters. As with all anthologies, there are stories that stand out more than others but with one exception, this one really doesn't have any clunkers. The worst ones are simply too short, where it doesn't feel like the plot had time to properly develop or (most frequently) the endings are too rushed and a little too pat. These flaws make sense when you consider that these are all 10-12,000 word pieces (or less in some cases). You're definitely getting a lot of fast-paced stories with this book.

My favorites were "I Had The Green Hornet's Love Child!" by Greg Cox (who definitely wins the award for best title), "Flight of the Yellow Jacket" by Howard Hopkins and "Fang and Sting" by Win Scott Eckert. That shouldn't be intended as a slight to the other stories, however -- I did, again with one exception, enjoy all of them. Special mention should be made of Ron Fortier's "Eyes of the Madonna," since many younger readers (myself included) have probably read more of his version of the character than any other, given that he used to write him at NOW.

As for the one exception that I keep mentioning, it comes in the form of "The Soul of Solomon" by Harlan Ellison. Now, I don't know Mr. Ellison but I've certainly read many interviews with him. He's complained in the past about editors rushing writers to produce "on time crap" as opposed to letting genuine art develop. Well, apparently, Mr. Ellison is also capable of taking a long time to create not art, but genuine "not on time crap." You see, according to his 'essay' (and to call it that is a stretch) he was given the opportunity to write a team-up between The Phantom and The Green Hornet... and then pissed it away. How many authors would kill for that opportunity? Most of the ones in this book alone would have rocked on that story! But Mr. Ellison only wrote a couple of pages of his story (which are included here) before wasting everyone's time over the course of a year. And then does he admit that he wasted a grand opportunity and prevented the publisher from actually getting this story written by someone else? Of course not. We're told that "I spent a year near the end of my life, trying to write what should never be written. The Phantom stands, The Green Hornet stands, they need never meet."

On a lighter note, the art by Ruben Procopio is brilliant and adds quite a bit to the package. Some of the pin-ups were so good that they could have easily been turned into book covers.

Overall, I give this one 4 out of 5 stars -- and probably would have given it 5 except for the inclusion of Ellison's naval-gazing waste of space.
Posted by The Rook at 4:46 AM