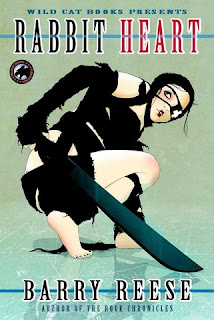 RABBIT HEART by Barry Reese shocked audiences upon its release in February 2010, mixing sex and violence in unpredictable fashion. The story of a young woman named Fiona Chapman and her descent into a world of madness and murder, RABBIT HEART has garnered praise from sources as varied as Ron Fortier and Percival Constantine.

And now comes word of not just one but two future sequels, one scheduled for a 2011 release and the other to follow in 2012. The second book is entitled KILLER SMILE and will feature a cover by noted artist Ed Mironiuk. Volume three is currently untitled but will feature a cover by Jason Levesque, who did RABBIT HEART'S haunting front image. All three books will eventually be collected into a giant omnibus edition.
Posted by The Rook at 11:18 AM