A LOVE STORY MILLIONS OF YEARS IN THE MAKING-NOW AVAILABLE 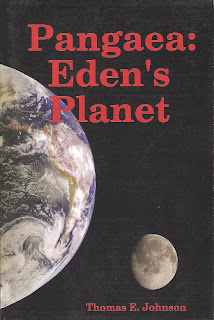 Hatboro, PA – Science Fiction returns to pulp adventure in Pangaea: Eden’s Planet. Seven astronauts en route to Mars encounter a time warp in space that disables their ship. Crash landing on Earth, they discover an alien planet sixty million years before the dinosaurs. Pangaea, the super continent, is filled with danger and terror, as they must survive against fierce reptiles that ruled the Earth 250 million years in the past.
Tom Johnson, author of the popular Jur series trades T-Rex for saber-toothed Gorgons and fin-backed Dimetrodons. At least there was a fence in Jurassic Park!
Johnson’s Pangaea: Eden’s Planet tells a tale of two people whose love blossoms on bloody soil. After landing, Colonel Evelyn Paterson and Major Adam Cooper, along with their crew, elect to make Pangaea their home. Although the warm climate and lush foliage earn their plot the title Garden of Eden, there is nothing peaceful about the cannibalistic reptilian humanoids or the saber-toothed Gorgons. These creatures are always hungry. Always.
Volcanic eruptions, earthquakes, and meteorite storms assault the travelers and their ship, threatening life and limb. Peterson and Cooper develop romantic feelings for each other, and the seedbed is planted for love. But first they must stay alive. Pangaea, this alleged Garden of Eden, does not forgive any mistakes.
For more information on Pangaea: Eden’s Planet, go to www.bloodredshadow.com or http://www15.brinkster.com/jur1/index.html. For reviewers or people wishing to read a brief excerpt, contact Barbara Custer (the publisher) at barbaracuster@hotmail.com, and place “Pangaea” in the subject line. Pangaea: Eden’s Planet is available for $13.95 plus S&H, through Night to Dawn Books. Query Barbara Custer at the Hotmail address.
Also available on Amazon.com, Filament Book Club, and other major book outlets.
Night to Dawn began as a magazine in Winter, 2002, with Barbara Custer taking over as editor in 2004. NTD features vampire/DF short stories, poetry, and illustrations. A semi-annual publication, NTD enjoys great reviews, and thus has started its foray into book publishing. Custer’s Twilight Healer is available through NTD. Coming soon: Johnson’s Guns Of The Black Ghost and Heroes Of Ancient Greece; also Pat McCain’s New Beginnings.
Contact information: