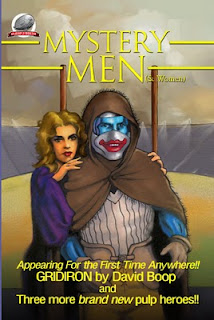 One thing that most fans, especially those of us who become writers, of Pulp fiction have in common is the deep desire to have created a character back in the hey day of pulps.  Masked figures haunting criminal ridden streets saving cringing citizens from thievery..or worse, we all have an idea for our own.   Although none of us will ever get the chance to go back in time and write in the era, the current resurgence in Pulp gives us the chance at the next best thing.  Fortunately Airship 27 and Cornerstone have snatched up the chance to bring in talented modern writers to create new heroes set in that Golden Age of fiction.

MYSTERY MEN (& WOMEN) is an anthology of original works by four different authors.  Each story highlights an original character created by each writer who fights crime and villainy in the 1930s.  The stories are as follows-

THE BADGE OF THE BUTCHER by B. C. Bell is a fantastic follow up to TALES OF THE BAGMAN, a collection published earlier this year by Airship/Cornerstone.  This adventure of 'Mac' McCullough, mobster turned masked hero, has all the pieces a pulp yarn needs, including a conflicted good guy, conflict with bad guys, interesting supporting characters, and a plot that grabs you from the first word and doesn't let up on its choke hold until THE END.  The Bagman has done a lot to end the hold of the mob on his neighborhood, but new forces have moved in to fill the void and it turns out they may just be members of  Chicago's finest.  Bell weaves a tale of a man
driven to desperate measures to insure justice in his corner of the world and he weaves it as tightly as any writer I've ever seen.
5 out of 5 tips of Hancock's Hat for this one indeed.

HELL HATH NO FURY by Aaron Smith has police connections as well in this introduction of his heroine, The Red Veil.  A tough young policeman's widow relies on her tough, self taught street skills and survival techniques to discover who killed her husband.  She fights her way to the truth in a costume of her own making and from behind a red veil.  The Red Veil is a character I definitely hope to
see again, a woman who balances emotion and violence well in her pursuit of justice.  Having said that, this debut story could use wit ha little mroe consistency.  The first half shows our heroine as having built herself a new image, then falling back on her upbringing in an almost transformative way.  This I thought was a good hook a different way of a character tapping who she needs to be.  The problem is Smith doesn't use this wonderful metamorphosis technique again.  Regardless, the Red Veil is an avenger of the downtrodden that IO hope to see for several stories to come.
3 out of 5 tips of Hancock's Hat, definite potential for this one.

FIRST DOWN by David Boop is almost as much horror story as it is pulp tale.  A football quarterback is propositioned by local mobsters to throw a game and, when he refuses, he is tortured and transformed into a hulking, seemiongly emotionless beast.  This take on the pulp hero archetype is weird and off kilter with definite gothic overtones.  Boop's description of his protagonist is terrible and his internal struggle is agonizing.  Equally so, the bad guys are deserving of hte pounding that they get.  This story is full of unexpecteds, but still manages to be true to the pulp formula.
4 out of 5 Tips of Hancock's Hat, reserved for a special few.

THE SACRED AND THE PROFANE by Barry Reese exposes readers to the myeterious, enigmatic Dusk.   This femme carries fatale to a whole new level due to the unexplained horrific effects of evil men looking upon her uncovered face.  Reese utilizes an old trope of cop tales, having a policeman and his secretary, both attractive and intelligent get involved in the hunt for a religious relic.  The back and forth of the relationship is a real thrill in this story and makes for a good balance to the pulsing action and final retribution when Dusk is on the scene.  The story builds and builds and ends exactly as it should, with an explosive twist that made me want more.
5 out of 5 Tips of Hancock's Hat, awesome stuff.

Interior illustrations on this book are top notch.  Davis delivers in each and every story, some of the best work I've seen of his, both in art and how it adds to the impact of the tale.  Ingrid Hardy also delivers a cover that is well done technique wise.  A major issue I had with the cover, however, had nothing to do with Hardy's work, but more with the subject.  Boop's Gridiron is on the front, a damsel in distress behind him.  Instead of looking like the monstrous hero that I read within the story, this portrayal is almost comical and if not that, it is distracting in a 'Just what is this' way, not a 'Oh, this is something i want to know more about' way.  The cover would work for me if Gridiron had a little more of the Quasimodo feel portrayed in the story than the hooded Joker the cover hints at.
3 out of 5 Tips of Hancock's Hat, it's a good looking book overall.

Overall rating for MYSTERY MEN (& WOMEN)
4 out 5 Tips of Hancock's Hat-Definitely a wonderful homage to the pulps of yesteryear by the writers and artists of today.
Posted by All Pulp at 2:47 PM