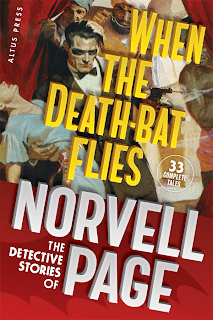 When the Death-Bat Flies: The Detective Stories of Norvell Page
Norvell W. Page (Author), Will Murray (Introduction), Chris Kalb (Cover Design)
Best known for his Spider pulp stories, scribe Norvell Page was a master mystery writer as well. This 800-page book collects over 30 of Page’s detective stories from the pages of DETECTIVE TALES, THE SPIDER, DETECTIVE FICTION WEEKLY and STRANGE DETECTIVE MYSTERIES, most of which have never been reprinted before. Includes an all-new
introduction by Will Murray.
796 pages, $39.95 sc, hc TBD 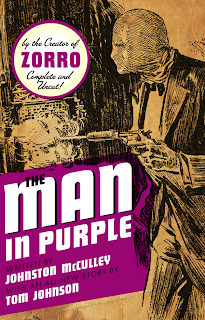 AND AVAILABLE SOON FROM ALTUS PRESS!! 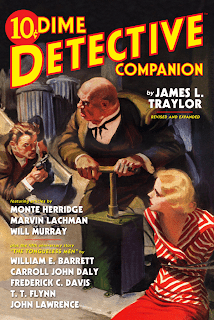 Dime Detective Magazine was second only to Black Mask as the dean of detective/P.I./hard boiled pulp magazines, and was the home of Carroll John Daly, Frederick Nebel, John D. MacDonald, Cornell Woolrich, Erle Stanley Gardner, and many other top-notch scribes. This book indexes all 274 issues of Dime Detective, contains several articles on the series and its writers, and as a bonus, the fifth anniversary round-robin story from the November 1936 issue, "The Tonguess Men," by William E. Barrett, Carroll John Daly, Frederick C. Davis, T. T. Flynn, and John Lawrence. 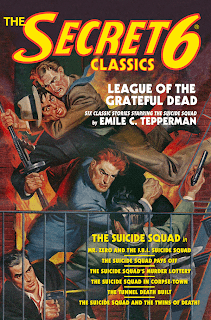 The Secret 6 Classics: League of the Grateful Dead: Featuring The Suicide Squad
Authored by Emile C. Tepperman
Klaw, Murdoch and Kerrigan... the FBI's Suicide Squad return in this collection of six classic Suicide adventures from the pages of ACE-G-MEN STORIES from 1939-43:
Mr. Zero and the F.B.I. Suicide Squad: One for all, and all for one--even in death--was the fighting creed of the three wildest, gun-swinging law aces of the F.B.I.!
The Suicide Squad Pays Off: The Black Sheep of the F.B.I. turn a terror-ridden town upside down in a finish-fight with a gang that had decreed death for all G-men!
The Suicide Squad's Murder Lottery: Kerrigan and Klaw came to mourn at the grave of their murdered comrade... and stayed to follow a fighting ghost to war--against the Twentieth Century Nero who held a third of the nation in abject slavery!
The Suicide Squad in Corpse-Town: America's new air arm, the keystone in her vast defense program: cornered on the brink of destruction! ...Only three men--Kerrigan, Murdoch and Klaw--could prevent disaster, and that grim trio of Death's Volunteers was already living on
borrowed, bartered time!
The Tunnel Death Built: Who had the power, the resourcefulness, and the organization to steal thousands of priceless weapons from Uncle Sam, and ship them secretly abroad? The mystery was a job for the inimitable Suicide Squad-Kerrigan, Murdoch and Klaw. But they were
already waging a private, unofficial battle against Nicodemus Largo-the most invulnerable crime-king of them all!
The Suicide Squad and the Twins of Death!: When Blond Otto The Hangman and his Nazi aides told Murdoch that he would soon join the dead Kerrigan and Klaw, he waited until he did--then added the roar of a dead man's weapon to the blazing guns of his ghostly pals!
324 pages, $29.95 sc, $39.95 hc
Posted by All Pulp at 11:49 AM