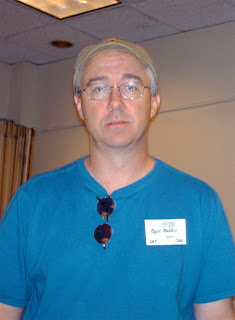 AP – Hi Mark, and thanks so much for stopping by All Pulp HQ. In the past few years you’ve made quite a name for yourself in the pulp field and it is a pleasure to finally be able to sit and talk with you about your art career. Why don’t we start with a little informal background. Where were you born and raised? Where do you live now? And do you have a “day” job with doing pulp art?

MM – I was born on Tyndall Air Force Base in Panama City, Florida to Don and Joann Maddox. I have one brother, Mike and three sisters, Elise, Carole and Jeanne . Being a military brat had us moving around a lot. We lived in Germany, South Dakota, Maryland and North Carolina. After my dad retired we moved to Tallahassee, Florida. Later, when I got married my wife Carlyn and I moved to Thomasville, Georgia, had two incredible kids and are now settled in Athens, about an hour east of Atlanta. We really like it here.
At present the only work I am doing is freelance… the fun kind: Book covers (some which are pulp), illustrations, comic book covers, monster magazine covers, private commissions, game design, concept designs, logos, etc. It isn’t at the financial level I would like yet but I’m fairly new to this type work. Before that I did straight corporate graphics which isn’t terrible but it’s not nearly as much fun as my current endeavors.

AP – Mark, what kind of art education do you have? Did you always want to be a professional artist or was it something that came to you later in life?

MM – My parents were very supportive of my abilities which started around the age of ten. In high school I took art classes but the teacher was a joke. Some of the interns that came in were a lot more beneficial to my creative advancement. My dad saw my talent as a possible life long career and pushed me to go to take the commercial art course at Lively Vo-Tech school in Tallahassee. I had a great teacher by the name of Oral Ledbetter. He was an old school commercial artist/ illustrator and he taught us things that are all but lost today with computers and such. I also went to the local community college and Florida State University which had good art programs.

AP – Were you a comic book or sci-fi fan growing up? And did either of these genres influence your taste in art? 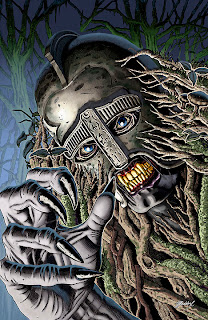 AP – Which artists, past and present, do you admire and did their styles have an effect on your own work as it developed?

MM - Dr. Seuss was awesome for a little kid. To this day I look at his work when I’m reading to my kids and marvel at it. Jack Kirby is, to me, far and away the greatest comic book artist. I am also a big fan of Will Eisner, Moebius, Frank Bellamy, Sergio Toppi, Joe Kubert, John Severin, Herge, Jose Gonzlez, Geoff Darrow, artists on the Jonny Quest TV show and so many more. I am a huge fan of illustrators like N. C. Wyeth, Dean Cornwell, Virgil Finlay, Franklin Booth, James Montgomery Flagg, Charles Dana Gibson, Basil Gogos, Sanjulian, etc. Fine artists include the impressionists, John Singer Sargent, Anders Zorn, Vermeer, Edward Hopper, Chuck Close and the Photorealists,

AP – Much of your early work is clearly inspired by horror and sci-fi movies. I take it you a movie fan? What is your favorite movie of all time?

MM – That’s not a fair question! I have so many favorites it’s impossible to pick just one. Lawrence of Arabia and Doctor Zhivago are two of my classic favorites. Raiders of the Lost Ark, Aliens and Universal monster movies are some of my genre favorites. Popcorn munchers include: Dracula A.D. 1972, Japanese monster movies, Omega Man, Hell Drivers. The list is so huge a ten gig hard drive couldn’t hold it.

AP – Okay, so how did you get involved with pulps?

MM – A guy named Blake Wilkie introduced me to Ron Fortier who was with Wildcat books at the time. We did a few tiny comic projects together and one day he dropped me a line saying he needed a cover for his book Captain Hazzard and the Curse of the Red Maggot. I think the artist that was to do it had to drop out at the last second. It was a dream come true for me. He needed it quick and I was willing to burn the midnight oil to get it ready.

AP - You seem to have a natural affinity for pulps. What is it about the genre that appeals to you?

MM – I was born in the early sixties and came back to the United States when the big thing was the campy batman TV show (I preferred The Green Hornet). I later found out about pulps, radio plays and cliffhanger serials (Tom Tyler as Captain Marvel, yay!) and realized there was a huge amount of this great entertainment from a long time ago where fantastic adventures were treated seriously. Doc Savage, The Shadow, John Carter, Weird Tales, etc. That’s just great stuff! Plus it fit right in with my love of comics and old Hollywood. 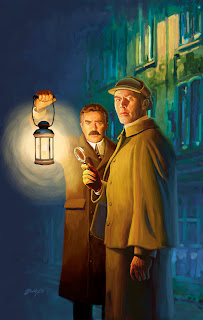 AP – You were the recipient of the first Pulp Factory Award for Best Pulp Cover of 2009.
Tell us about that and how it all came about? What piece did you win it for?

MM – The piece I won for was Airship27’s Sherlock Holmes: Consulting Detective. It was actually a piece that I resisted doing. I am a big fan of Holmes but in his original Strand Magazine form. When I was told I could do the art and design based on the original look and typography I was all for it. I was also allowed to dedicate the book to my late mother-in-law. She was a big Holmes fan and it would have pleased her so. I was very happy with the way that piece turned out because it was my take on Holmes and Watson the way they look in my mind’s eye. Most people don’t realize that Watson was a handsome, fit man.

AP – Weren’t you actually nominated for two covers that year and how did it feel to compete against yourself? Did you prefer one piece over the other?

MM – It felt great and strange! I was hoping they didn’t cancel each other out. The other cover was Captain Hazzard and the Python Men of the Lost City. And I really like them both equally. That’s a good feeling to have.

AP – Since your work for Airship 27, you’ve expanded your pulp career by working for other companies in the field. Tell us about your projects for Bill Cunningham’s Pulp 2.0 Press?

I’ve completed the first cover in the series called Frankenstein Returns! I am very pleased with the way it turned out and Bills graphics look great on it. I’m getting ready to start volume two’s cover in the next month or so. I’m pretty excited about it.

MM – Yes, there are two of those so far and it was a lot of fun featuring all these classic characters together in the same image. 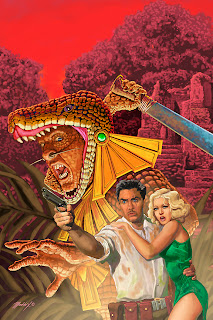 AP – You recently started doing covers for Moonstone Comics. Tells us about that and did the experience vary much from doing pulp covers?

MM – I’ve completed two covers and am working on a third. The first one was for Kolchak: The Night Stalker Files written by Christopher Mills . I was in front of the TV the night The Night Stalker film premiered in the early seventies and have been a fan ever since. It was another dream come true. The second cover was for the first issue of The Heap written by Charles Knauf (Iron Man and Captain America: Theater of War), featuring the creature from the Airboy comics of the forties. What could be better than a monster tearing the heads off of Nazis? The latest cover is for the great superspy Derrick Flint written by Gary Phillips (Vertigo Crime’s COWBOYS). I’m doing this piece with a nod to sixities design styles and having a blast. Moonstone publisher, Joe Gentile has been really great to work with.

AP – People who have met you personally all comment on your dry, acerbic wit. Have you always had this humorist bent and do you like looking at the world in a slightly skewered way?

MM – I don’t know. I come from a family smart mouths. Everything had to have a comeback. It’s a way for me to keep things lively and it’s nice to see people laugh.


AP – Is there any single genre you have yet to work in that you would really like tackle?

MM – Adventure, 60’s period Marvel heroes, monsters, drama, crime, sci-fi. I’d even like to tackle a western some time. In the seventies, Thrilling Adventures Magazine did a short comic about Lawrence of Arabia. I would love to work on something like that. A sort of adding on to the legend. Like the Daniel Boone TV show.

AP - So, wrapping this all up here. What’s on the horizon for you project wise? Can you give our readers some preview as to where your marvelous art is going to pop up next? 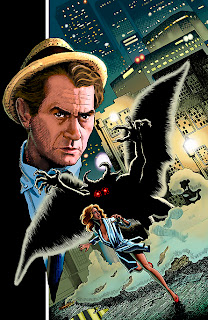 MM – Well besides the work for Moonstone I’ve got two new Hammer film books that are coming out. One called The Last Bus to Bray: The Unfilmed Hammer. It’s about many of the films that Hammer almost got produced but didn’t see the light of a projector for one reason or another. This includes the infamous Vampirella, a movie about Prince Vlad starring Yul Brunner, another about the Loch Ness Monster with backing by David Frost and many others. The other book is from Hemlock called Hammers Fantasy & Sci-Fi dealing with films outside of the Dracula and Frankenstein realm (One Million Years B.C., Quatermass, etc.). There are also one or two projects I’ve been sworn to secrecy on although I can say they are sci-fi and monster related… plus more artwork for Little Shoppe of Horrors.

AP - Mark, this has been a blast. Thanks so much.