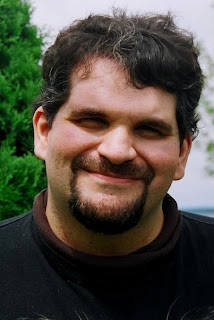 AP: Thanks for taking the time to speak with us! How about we start with you telling us a little bit about yourself -- where are you from and how did you develop an interesting in writing?
RB: Thanks for having me here to share my story with your readers. I’m a freelance journalist/photojournalist from Pembroke, Ontario, Canada. I have had a passion for writing since I was 10 years old. I started reading comics before I was in kindergarten. I love how a great storyteller can weave an epic tale. When I started writing in my school journal, I wanted to make my journal sound more like an adventure than a simple record of school events. My third grade teacher complimented me on my imagination. I continued writing and felt a fire inside me. I pursued that interest to North Bay where I studied journalism at Canadore College. I received the North Bay Nugget Journalism Award. My articles have appeared in newspapers all across Ontario and on the Internet. My most renowned piece was a five-part series on child pornography called, “They Hide in Suits. The feature appeared in Osprey newspapers across Ontario. Since then writing has been my mistress.
AP: In addition to writing, you're also a photographer -- do you think that helps you in any way as a writer? Are you able to look at things from a different visual perspective and then transfer that to the page?
RB: That’s an excellent question. Without a doubt, photography has played a key role in my writing. A photo is a visual account of an event or moment. It captures the essence of the scene and tells the story. Photography brings it all to life in front of our eyes. Before I take a photo, I follow three principle steps: What is the best angle to take a photo? Will the new angle change the meaning of the photo or add more detail to the story? And what can I do to add more feeling into this picture? In photography, as in writing, we change the angles of our characters, the scene, the plot, and the essence. A writer begins with a mental image of what he/she sees for the scene in question. As well, drawing is a form of photography, and it allows us to focus on what’s going on in the scene. I believe photography has been a faithful guide in my writing. One of the fathers of photography, Louis Daguerre said it best, ‘I have seized the light. I have arrested its flight.’ And that’s what writing is all about, capturing your readers’ attention by giving them a visual picture in their minds.

AP: You recently published your first novel (The Resurgence: Chronicles of the Shadow Chaser), which is actually the first book in a two-part series. What's the story on The Shadow Chaser and are there plans to continue the series past the announced two volumes?RB: I created Shadow Chaser when I was 16 years old. Me and the guys were always getting together once a week to play a role-playing game (rpg). It was a few weeks after Christmas, and I just got this new super-hero rpg. So, we started a new campaign. The other players took all the cool heroes, so I decided to create my own. I started to draw a rough design, and then it was time to give my hero a name. The smoke was coming out of my ears; I wanted use something cool and original. So I decided, for now, I’ll call my hero Shadow Chaser. As the weeks went by, I started to expand on the story and the characters. It came to the point I had created a binder just for Shadow Chaser. Then about a few months later, I forgot to do an English assignment where you had to create a short fiction story. To save myself from the jaws of detention, I used a quick short story I did on Shadow Chaser, and I got an “A” for originality. Many friends told me I should write a Shadow Chaser novel. In 2005, I decided to put the character to the test. Five years and several rewrites later, The Shadow Chaser is ready to fight against the forces of evil. So, the first book is an origin story. We have the old Shadow Chaser, Dr. Arthur Brown, looking for a new Shadow Chaser to take on the evil Scorpion Syndicate. He chooses, Kevin Wolf, a dispirited seventeen-year-old, damaged by the brutal murder of a loved one, to reprise his role. But will Kevin be able to live up to the Shadow Chaser legacy? It’s a question readers will be asking at the end of the story.

At the present, we’re editing the second novel, The Reckoning: Chronicles of the Shadow Chaser, the conclusion of the two-book series. We’re gunning for a 2011 release, but rest assured, it’s not the end. I don’t want to add a spoiler alert, but you will see a big change in our hero’s life, and I don’t mean two fives for a ten. I’m also in the free writing process for a third Shadow Chaser novel; where we will encounter Shadow Chaser’s newest and most powerful villain, Deathlore. My nephew, Ron Belaire Jr. (who also did the inks for the cover), and I created this bad boy. And believe me; SC will have his hands full. I’m also in the talks with some artists to bring SC into the comic book world. So, I will be quite busy, but it’s a great busy, and I’m lovin’ every minute of it. 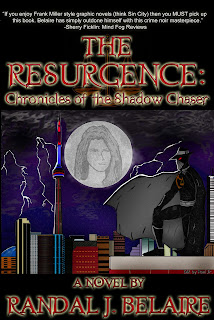 AP: Shadow Chaser certainly looks like he draws from both the classic pulps and also from the world of comic books. What influences went into the development of the character?
RB: I believe it goes back my years reading comics and the classic pulp characters such as the Shadow, the Spider, and the Phantom. Since I was a kid, my mom would tell me stories of when my grandfather used to listen to the classic radio series of the Shadow. She used to tell how Orson Well’s portrayal of the Shadow frightened her. She said his laugh echoed in their small wooden cabin. But my grandfather was glued to the radio and enjoyed every moment of drama and escapism. Times were tough in 1940’s Quebec; he worked hard and for just under a dollar a day. When he arrived home, he would turn on the radio and listen to the Shadow. I never met my grandfather, but the story always stayed with me. It would be a safe bet to say, in a way, Shadow Chaser has allowed me to be closer to my grandfather. Also, the classic Spider-man stories of the 70’s and 80’s really played a role in developing the character. What I loved about Spider-man was his humanity and he was a teen with real-life problems. So, I wanted Shadow Chaser to have the same realism. He’s far from perfect; he’s constantly making choices, and those choices have consequences. Consequences lead to conflict, and conflict leads to great storytelling.
AP: One thing that's kind of unusual about your promotion of the book are all the trailers and videos you've posted -- who creates those and what kind of work goes into them? Do you think this has worked in terms of attracting attention to the book?
RB: My nephew Ron and I have created them all to this point. We used a computer game called the Movies by Lionhead Studios. The software allowed us to create movies in a Sims type atmosphere. It takes many man-hours to come up with 3 to 4 minutes of footage, but I think it’s worth the effort; especially when I saw Shadow Chaser coming alive and knocking out a thug in front of my monitor. I stumbled on this by accident. At first, we were thinking of doing audio trailers with photo stills, but I happened to be checking trailers and spotted the word “machinima” during my search. The technology behind it is amazing. I checked out the forums and asked if anyone could create a Shadow Chaser costume template. I was fortunate that I found such a person in Mr. Michael Perkey. He created the template and the first teaser trailer went up in the fall of 2009. The reaction was amazing; I had responses from people from all over the world. The highlight was when former Marvel and DC artist, Michael Netzer added my teaser trailer to his favourites on his YouTube channel. After the creation and positive feedback I received from the teaser trailer, came the extended trailer. And I was surprised by another turn of events. I had supporters and Facebook friends, whom I have never met, asked me if they could take part in lending out their voices for characters. From that moment, I knew I had something special. The best part of all of is I met some awesome people as result of these trailers. So, I have spread the word about the book and made new friends. That alone is incredible. With YouTube and social media, book trailers have now become just as popular as movie trailers. Hopefully within the next year, I will be upgrading my software to increase the quality of the trailers. They’re a great promotional tool.
AP: This is a real boom time for modern pulp fiction: are there any authors or series out there that you're currently a fan of? Do you see yourself branching out into other characters besides just the Shadow Chaser?
RB: I’m just starting to follow the modern pulp scene, but what I’m seeing so far is off the charts. One of these modern pulp characters I am following is Don Gates’s upcoming series, Challenger Storm. Recently, I watched a Challenger Storm tribute video, and it really brought the series alive. I can’t wait for its release. I believe there is a resurgence of interest in the classic pulp tales of the past. Many of my members have said that Shadow Chaser, and other new heroes like him, are considered to be within the “Neo-Pulp” genre. I’m honoured and humbled to be a part of this new and exciting universe, but at the same time, I feel the old pulp stories are still of tremendous interest to readers today.
As for branching out, I’m currently talking with Dan Barnes, the creator of Tree Frog Comics, to do a Shadow Chaser crossover with his flagship character, Vatican: the Angel of Justice. And I’m thinking of bringing in another creation of mine to the public. But for now, Shadow Chaser is my top priority.
AP: If people want to learn more about you or the Shadow Chaser, where should they go? And where can they buy a copy of the book?
RB http://www.theshadowchaser.com. And the Facebook fan group, The Shadow Chaser: Enter the Shadow Crypt, at this link: http://www.facebook.com/group.php?gid=8891102875
The novel is available at Amazon.com, Amazon.ca, Amazon.co.uk, Barnes & Noble online, and Lulu.com. Currently, if they go to Lulu.com, they can save 25% off the cover price. As well, if anyone is interested to have a signed copy, you can check out the official website and send me a message.
AP: Thanks for joining us!
RB: Thank you for having me. If I may, I want to take this moment to thank all my family, friends, and supporters. You’re all the best. For story is nothing without the reader.
Posted by The Rook at 7:56 AM