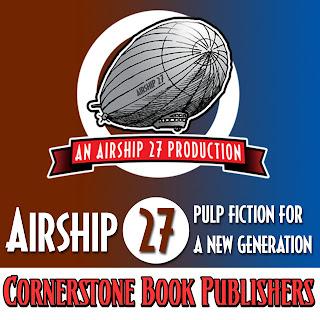 Charles R. Saunders, one of the most respected fantasy adventure writers in the field, has joined Airship 27 Productions to create a black pulp hero. Saunders is best known for his series of novels featuring Imaro, the black warrior of an ancient, mythological Africa. His work has been compared to being equal parts Robert E. Howard and J.R.R. Tolkien.

Saunders and Airship 27 Editor, Ron Fortier, have been friends for many years. Saunders had been working for the company which packages titles for Cornerstone Book Publishers as a proof-reader. It was the beginning of his first exposure to the world of pulps. One he enjoyed a great deal. Enough to offer Fortier an idea for a novel featuring a 1930s black avenger along the lines of the Shadow and the Spider.

“I was ecstatic when Charles brought up the idea,” says Fortier. “One of the less savory aspects of the pulps was their inherent racism. The pulps of the 1930s reflected a prejudicial ignorance that was representative of the country’s attitude during those times.” Today’s modern pulp writers and editors often grapple with this sensitive issue as whether or not to depict it accurately in their stories. Some opt to ignore it altogether.

“So that was the challenge,” Fortier continues. “Could Charles give us an African American hero and make it work in an authentic 1930’s New York setting?”

DAMBALLA, the name of the book, is Saunders’ response to that question. Cast in the mold of the classic pulp heroes, the noted author describes his new character as the 30s version of a well known cinema tough guy. “Damballa, like John Shaft, ‘will risk his neck for his fellow man,’” says Saunders. “The difference is, Damballa wears a cloak instead of a leather jacket, and uses both ancient African wisdom and modern science in his battle against injustice.”

Airship 27 Productions plans to release this ground breaking pulp thriller in the Spring of 2011.
Posted by All Pulp at 5:19 AM