Edgar Rice Burroughs’ Tarzan turns 100 this year, but don’t think celebrating his centennial has slowed down the Lord of the Jungle. Quite the opposite. Here are a few odds and ends from Tarzan’s world happening in 2012 and beyond.

EDGAR RICE BURROUGHS COMIC SERVICE-
By signing up for the new Edgar Rice Burroughs Comic Service, you will be able to view New and Coming Tarzan comics as soon as they leave our artist’s desk!


TARZAN ART TO APPEAR ON NEW USPS POSTAGE STAMP-
CHESTERFIELD, VA - Edgar Rice Burroughs, the author who created Tarzan and a host of other sci-fi heroes a century ago, didn't get much respect for what was considered pulp fiction at the time. Now, the work of a Chesterfield artist commemorating the prolific author is taking a licking literally.

A brand-new postage stamp showing Burroughs and Tarzan is set to take off around the world. It's the second U.S. Postal Service stamp drawn by Sterling Hundley, an artist, illustrator and Virginia Commonwealth University art professor. (His first was Oveta Culp Hobby, the first woman to hold a presidential cabinet position.) 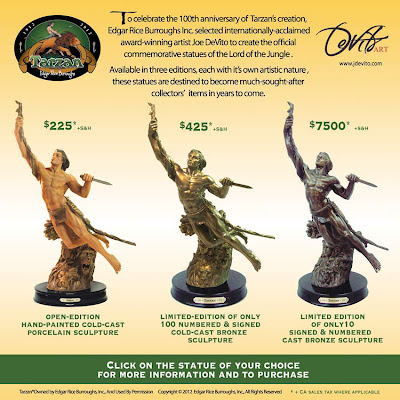 JOE KUBERT'S TARZAN OF THE APES: ARTIST'S EDITION COMING IN SEPTEMBER-
Joe Kubert is one of the most lauded artists in the history of comics, a true living legend. He has been a vital creative force since the 1940s and remains so to this day. He has had defining runs on Hawkman, Enemy Ace, Tor, Sgt. Rock, and many others. Among his career highlights is Tarzan of the Apes, and Kubert's rendition could arguably be called the definitive comic adaptation of the Ape-man.

“To have the Tarzan stories I drew commemorate the 100th anniversary of a strip I fell in love with as a kid is the thrill of a lifetime,” said Joe Kubert, writer and artist of all the stories in this Artist's Edition.

This Artist’s Edition collects six complete Kubert Tarzan adventures, including the classic four-part origin story. Each page is vividly reproduced from the original art and presented as no comics readers have seen before. For fans of Kubert and Tarzan, this new entry in the Eisner-winning Artist’s Edition line must be seen to be believed!

2012 is the centennial year for Tarzan. Created by master storyteller Edgar Rice Burroughs, Tarzan is instantly recognizable to countless fans around the globe. Other notable creations of Burroughs’ include John Carter of Mars, Korak, Carson of Venus, and At the Earth’s Core.

"I first read these comics when I was 10 years old, and they remain some of my favorite stories ever," said Editor Scott Dunbier, "this is Joe Kubert at his absolute best."

What is an Artist’s Edition? Artist’s Editions are printed the same size as the original art. While appearing to be in black & white, each page has been scanned in COLOR to mimic as closely as possible the experience of viewing the actual original art—for example, you are able to clearly see paste-overs, blue pencils in the art, editorial notes, and art corrections. Each page is printed the same size as drawn, and the paper selected is as close as possible to the original art board.

JOE KUBERT’S TARZAN OF THE APE: ARTIST’S EDITION ($100, hardcover, black and white, 156 pages, 12” x 17”) will be available in stores September 2012.
Visit IDWPublishing.com to learn more about the company and its top-selling books. IDW can also be found at http://www.facebook.com/#!/idwpublishing and http://tumblr.idwpublishing.com/ and on Twitter at @idwpublishing.

Posted by BobbyNash at 4:35 PM