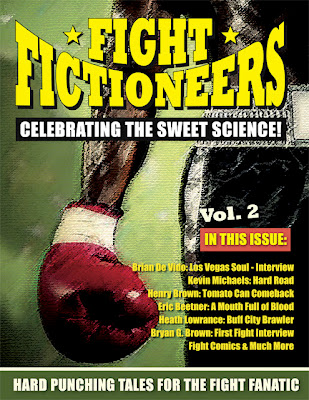 FOR YOUR FREE COPY OF THIS ACTION PACKED E-ZINE SEND AN EMAIL REQUEST TO: fightcardseries@gmail.com

Fight Fictioneers Magazine (FFM) is a vehicle for both promoting the Fight Card series and also the best fight fiction in general. Immense thanks are due to our Fight Card team member in Australia, David Foster (Fight Card: King Of The Outback), for his hard work and diligence in formatting and bringing this issue of FFM into the virtual world (as he did with Vol 1).

Hopefully, there will be another issue to kick off the new year as we march into 2013 with the Fight Card banner held high. FFM Vol 2 will be made available for free to anyone who asks for a copy, so please distribute copies to your friends and fans. Any feedback would also be appreciated ...

Congratulations to Fight Card authors Mel Odom (Omega Blue), Eric Beetner (The Devil Doesn't Want Me), Heath Lowrance (City Of Heretics), Mike Faricy (Bombshell), and David Foster (The Librio Defection / Bushwhacked - both under his James Hopewood pseudonym), among others for the successful launching of new critically acclaimed titles - all available on Amazon. Way to go, gang! 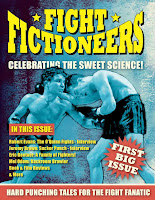 There are other specific plans afoot for Fight Card in 2013, which I will reveal both as they firm up and as I am allowed to talk specifics.

THX TO ALL THE FIGHT CARD FANS WHO HAVE SUPPORTED THE SERIES THIS YEAR ...

For those who missed it, you can also request a copy of Fight Fictioneers #1 as well. Email fightcardseries@gmail.com for details.
Posted by BobbyNash at 10:39 AM