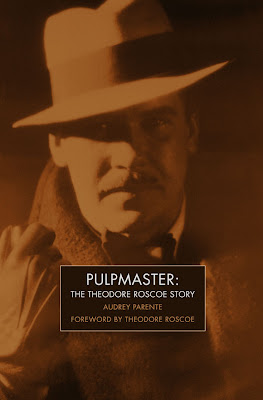 Altus Press presents Pulpmaster: The Theodore Roscoe Story. Released on September 23, the book is written by Audrey Parente and features a forward by Theodore Roscoe himself.

About Pulpmaster: The Theodore Roscoe Story:
The allure of French Foreign Legionnaire Thibaut Corday’s adventures flowed from the pen of Theodore Roscoe. Exotic tales from a dusky outpost unfolded in glossy-covered 10-cent magazines, before television. Hundreds of Roscoe’s yarns, published on cheap pulp paper unraveled mysteries, immortalized hometown heroes and stirred the imagination of a generation. In real life, Roscoe stowed aboard tramp steamers and mingled with locals in far away corners. His intriguing style later echoed in non-fiction works, when he was among the first to view declassified Lincoln assassination documents and when he documented historic American military operations. Journalist Audrey Parente became steeped in American pulp history when she lived blocks away from Roscoe in Ormond Beach, Florida, where she chronicled his life for this book.

Pulpmaster: The Theodore Roscoe Story is available in paperback from Amazon, in a limited edition (only 100 made) hardcover, and from Mike Chomko Books.

Posted by BobbyNash at 3:30 PM