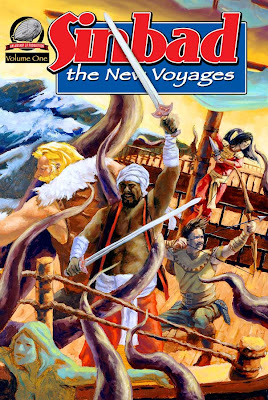 The greatest seafaring adventurer of all times returns to the high seas, Sinbad the Sailor!

Born of countless legends and myths, this fearless rogue sets sail across the seven seas aboard his ship, the Blue Nymph, accompanied by an international crew of colorful, larger-than-life characters. Chief among these are the irascible Omar, a veteran seamen and trusted first mate, the blond Viking giant, Ralf Gunarson, the sophisticated archer from Gaul, Henri Delacrois and the mysterious, lovely and deadly female samurai, Tishimi Osara.  All of them banded together to follow their famous captain on perilous new voyages across the world’s oceans.

“This was another opportunity for us to explore another classic pulp genre,” Managing Editor Ron Fortier explained.  “Fantasy high adventure was a popular setting in many of the more exotic themed pulp titles of the 1930s.  Doing one starring Sinbad seemed a natural choice for us.”

Writers Nancy Hansen, I.A. Watson and Derrick Ferguson offer up three classic Sinbad tales to rival those of legend while adding a familiar sensibility from the cult favorite Sinbad movies of FX master, Ray Harryhausen.  SINBAD – The New Voyages will enthrall and entertain all lovers of fantasy adventure in a brand new way; featuring cover art by Bryan Fowler and twelve black and white illustrations by Ralf van der Hoeven.

“From inception to realization, this was one of the fastest titles we’ve ever put together,” Fortier added.  “In fact we received so many submissions that we had enough to fill two books.  You can expect volume two to sail over the horizon soon.  And we couldn’t be happier.”

So pack up your you traveling bags, bid ado to your loved ones and get ready to sail with the tide as Sinbad El Ari takes the tiller and the Blue Nymph sets sails once more; its destination worlds of wonder, mystery and high adventure.