FORTIER TAKES ON 'HAWK:HAND OF THE MACHINE! 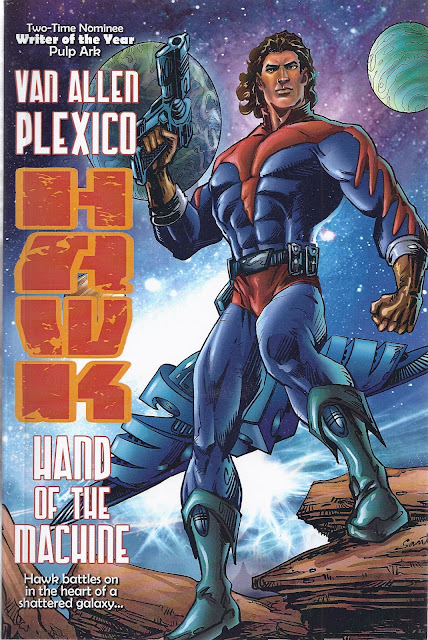 Space Operas have been around since Flash Gordon and Buck Rogers first burst forth in America’s funny pages. They certainly had their pulp counterparts from E.E. Smith’s Lensmen series to Edmond Hamilton’s Captain Future series and many others.  Then with the advent of television American children were inundated with such TV series as Tom Corbett – Space Cadet, Space Patrol and dozens of others all culminating in the 1960s with Gene Roddenberry’s “wagon train in space,” Star Trek.  Of course the eventual jump to the big screen was never far off.  Sci-fi space operas had been around since the serials but none were so audacious and clearly proud of their comic and pulp roots as George Lucas’ Star Wars franchise.

Which brings us full circle to the advent of New Pulp Fiction and a classic genre that never really went away thanks to likes of Frank Hebert, Jack Vance and E.C. Tubb.  Now you can add another name to that list of extraordinary space opera creators in Van Allen Plexico.  From his ground breaking comic inspired Sentinels series to the Vance inspired, “Lucian - The Dark God’s Homecoming,” this writer has jumped into the deep end of the imagination pool with no hesitation as this new novel proves.

Long ago, in a galaxy far, far away (sorry, I just couldn’t stop myself) the known universe was looked after by a computer intellect that spanned space and was called The Machine.  To enforce justice and order it created, via cloning, a small group of unique warriors to command its military forces.  They were known as the Hands and chief amongst these were Eagle, Falcon, Condor, Raven and Hawk.  When an insidious evil appeared from nowhere to threaten the peace and security of the universe, the Hands were deployed to battle this mysterious foe known simply as the Adversary. Although the Hands were successful in thwarting their enemy, they did so at a tremendous cost none of them could have foreseen.  One day The Machine suddenly went silent and the elite members of the Hand were found cut off and isolated for the first time in their existence.  Some were betrayed, captured and destroyed while others vanished without a trace.

The universal empires began to collapse and a new Dark Ages descended throughout the realms of mankind.  Thus it would remain for nearly a thousand years until one day, on a distant space station, a new Hawk was awakened.  Unfortunately the process was interrupted before all memories could be downloaded and the revived warrior found himself suffering from amnesia while at the same time thrust into combat on a space station combating bug-like alien invaders.

Hawk manages to escape aboard a small space programmed to respond to his commands and during his flight the craft’s artificial intelligence attempts to fill-in the missing gaps to his actual identity.  As if doesn’t wasn’t trouble enough, Hawk’s travels soon bring him to the aid of yet another awakened Hand; this one a Falcon whose damaged body has been augmented with cybernetic parts.  Upon being rescued by Hawk, Falcon is at first suspicious of his savior unwilling to believe a “new” Hawk has been allowed to be cloned.  This particular attitude only piques Hawk’s curiosity all the more and he begins to pester his former ally about his mysterious past.

Soon the two become aware that Hawk’s rebirth is tied to various alien confrontations throughout this sector of the space all indicative that the once defeated Adversary is back and once again and eager to pick up with his quest for domination.  Mysteries continue to pile on while our duo attempt to piece together the secrets of the past in hopes they will somehow provide a solution to the threats now facing them.

Plexico’s ability to drive a narrative at light-speeds is unquestioned and even though the book comes in at a whopping page count, its pacing moves the reader along fluidly with each new chapter adding to both the plot and its inherent suspense all leading to a very satisfying climax.  An ending, by the way, with ample potential for sequels starring this great cast of characters.

Still, the amnesia-plagued-hero seeking his identity is a plot Plexico has now used in several of his titles and is quite frankly becoming a bit too familiar.  As much as I admire his work and look forward to each new book, it is this reviewer’s hope that his next protagonist won’t be saddled with this same repetitive ploy.  That would be a real misstep in a stellar writing career thus far.  That said, “HAWK – Hand of the Machine,” is a solid space opera that is guaranteed to entertain you.