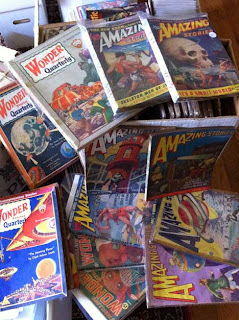 “This collection is literally farm – or should I say, barn-stored fresh,” said Basement Comics’ Al Stoltz.

“We recently purchased over five hundred pulps with lots of bed sheet size and regular pulp size great reads. Fantastic early sci fi and rocket covers and some of the best writers ever presenting in some cases their first published work like Ray Bradbury, L Ron Hubbard, Alfred Bester and more,” he said.

One pulp even features a letter to the editor from a then-17-year-old Jerry Siegel, co-creator of Superman, Stoltz said. “This is really a piece of comic history!”

Also included in the offerings are the second appearance of Buck Rogers and even some John Carter covers and stories.

“We are pricing and getting ready as many as we can for the show and we hope pulp collectors will be pleased with the selection,” he said.

Thanks to SCOOP for the scoop.