Yesteryear is on the Way! Tommy Hancock Interview 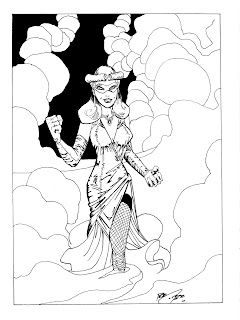 AP: Thanks for joining us, Tommy! Can you tell us a little about the genesis of Yesteryear and what it's about?

TH: Thanks, it’s cool to be sitting on this side of the interview again. The genesis of YESTERYEAR is rooted way back in my fan fiction days. I was making a decent name for myself writing Golden Age inspired Fan Fiction on the internet in the late 1990s and up into the early 2000s, but, like so many writers of said stuff, realized it was simply what its name implied, fiction written by a fan. So, I started putting my thoughts toward original work and several great ideas came out of that period. Most of those ideas ended up populating one particular story line, one universe in my imagination. I started looking at what the impact of super types would be on our world if they simply just started on one day in history. What would they make their costumes out of? Why would they even wear costumes? And what about history, would heroes and villains impact history as dramatically as we think they would or would history have rolled on pretty much the same as it has? Out of that came the concept of public perception versus private realities. That’s the genesis of YESTERYEAR and mostly what its about.

The plot of YESTERYEAR is different, also. There are really three stories going on here. There is a modern tale being told about a manuscript that was written by a former Hero in 1955, but the author and said book both vanished. The unfinished manuscript and all the research accompanying it show up at a publisher’s office in the modern era. What ensues from there is a chase tale combined with a mystery. Who all wants this book and why? What does it contain that could be so dangerous to so many people? Where is the author of this explosive tome? And why did THIS publisher get it? 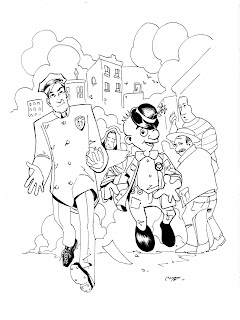 Included within YESTERYEAR along with the modern tale are excerpts from the fabled manuscript. Some of these are finished pieces by the missing writer, others are letters, notes on napkins, etc. that he gathered for research. Within this manuscript, there are two storylines going on, one showing how the public viewed their first heroes and villains and the truth behind that view. There’s a lot packed into this, but hopefully it all unravels into one great story.

AP: Who are the major characters in the novel and are they based on any pre-existing pulp/superhero archetypes?

TH: Major characters, yeah, there’s a handful. Based on pulp/hero archetypes? You bet. The Hero is my take on Superman, except he’s a human who has these powers thrust on him. The Night, one of my personal favorites, is Batman, The Shadow, and The Spirit all mixed together. The archetype discussion could go on forever and many of them will be obvious, but will also have a twist to them. The real main character of this novel is the book that stirs the whole controversy. It may not be the key to the meaning of life, but its definitely a pot stirrer in this particular universe.

AP: Yesteryear is your first full-length novel -- how do you find writing in longer-former to be different than the short story and novellas you're known for? 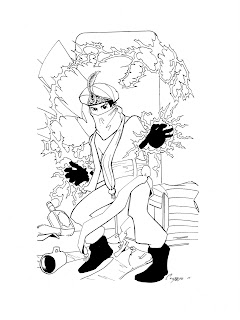 Well, that’s not really a question I can answer yet because YESTERYEAR, although it’s a full length novel, is like writing short stories and novellas and even short shorts because it’s a big tapestry sewn together with a central storyline. It’s not a linear novel in several respects. One thing, though, that I think is like other novels, is that you have to insure the story is intriguing and engaging from the first to the last word. I hope I’ve achieved this with YESTERYEAR and not just made something that comes off as gimmicky.

AP: Are there sequels in the works involving these characters?

TH: Oh, most definitely. YESTERYEAR tells a complete story in one way, but intentionally leaves so many questions to be answered. There are at least two direct sequels to this book that are possible, but there are tons of other directions to go as well. Each character could have at least their own collection or novel or series of novels and every one of them would fit into the mosaic that makes up this universe. Can YESTERYEAR be the only novel and readers be satisfied. Yes, I think so. Are there many, many more pieces that should be seen and add to the whole shebang. You bet. 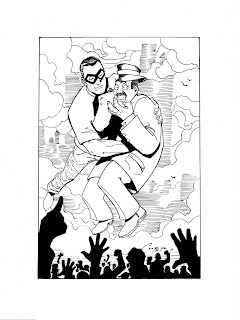 AP: I've heard that the book is being featured in an Arkansas-based literacy campaign? Can you tell us about that?

Yeah, this is the coolest part. A literacy organization that covers a large part of Northern Arkansas has seen the cover done by Jay Piscopo, a cover featuring three heroes reading a book, and want to use it as a part of a reading campaign. This is in the works and will be announced very shortly formally, but its really exciting that a pulp/hero novel gets the opportunity to encourage people to read more. Yes, its publicity for the book, but its more about being a part of what this is all about…getting people to read what we write.


AP: The cover by Jay Piscopo is gorgeous -- how much direction did you give him on that?

TH: Jay requires little to no direction, he is such an awesome talent. I did give him the three characters I wanted in it (From left to right, The Hero, The Freelancer, and The Night) and the fact that a book should be featured in some way. As far as design goes, though, that’s all Jay. The way he blended the characters, colors, and overall theme into a single image….wow. That cover says it all and sets the tone for the novel it fronts very well.

AP: Where and how will people be able to buy the book?

TH: Pro Se is making the move from Lulu to Createspace and this novel may be the first after that transition. But we’re also not sure how long this will take, so I’ll stay in touch to let you know exactly how to get it.

AP: Thanks for joining us and good luck with the novel!