GUEST REVIEW OF THE WEEK-CONSTANTINE ON FERGUSON

Diamondback: It Seemed Like A Good Idea At The Time 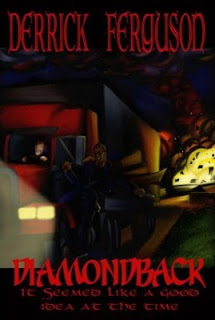 Ever since I read Derrick’s first book, Dillon and the Voice of Odin, I’ve been sold on his work. Derrick has a knack for intriguing characters, snappy dialogue, and some of the best action I’ve had the privilege of reading.

Whereas Derrick’s Dillon series (as of this writing composed of Dillon and the Voice of Odin and the follow-up Dillon and the Legend of the Golden Bell) is a love letter to Doc Savage and the classic adventure story, Diamondback is a true spaghetti western. But like with Dillon, Derrick mixes his love of the classics with a modern sensibility. Derrick has frequently referred to this story as an urban western and that’s the most apt description I can think of.

Although this story could have been set in the Old West out on the frontier, it fits perfectly in the fictional city of Denbrook, which could easily give Gotham a run for its money.

When one of Denbrook’s biggest crime lords is planning to bring in a shipment of hi-tech weapons, it just so happens to coincide with the arrival of gun-for-hire Diamondback Vogel. And this is one mercenary who is the best there is at what he does and what he does is fill his enemies with lead and leave a trail of destruction in his wake. Crime lords, crooked cops, and secret societies are all involved and all interested in Diamondback’s role in this tale. However, Diamondback supposedly died in a shootout in another town, so one of the ongoing questions is just who is this guy? It’s a question that plays no small role in this story and I’m not going to say anything more about that, because you’re better off reading it for yourself.

What I will tell you is this is a great read that won’t suck up a lot of your time. Not only because it’s a short book, but also because Derrick wastes no words. He knows you’re here for the action and he gives it to you in abundance. The action sequences are crafted with both bloody intensity and a flawless grace that would make even John Woo envious. And by the time you reach the last page, you’ll want to track this Ferguson guy down and find out when the sequel is coming, because he leaves you with a cliffhanger ending that will put you on the edge of your seat.
Posted by All Pulp at 7:26 PM