Hancock Tips His Hat to a few Tales from Back in the Day!

This is a bit of a different column than my usual.   Normally, I tip my hat to the newest members and denizens of what many of us are referring to as "The Pulp Renaissance", looking at new authors and works.  But I also am a reader, student, and mostly a fan of the true blue classics from the golden era of Pulps.  Which means I read those missives and from time to time will share my thoughts with some of them with you...like these for instance...

DEATH IS TOO EASY
by Arthur J. Burks
http://www.blackmask.com/, http://www.pulpgen.com/

Two cops work as partners and work from two different philosophies, one by the book, the other by the gun.    When it finally gets too much for the law and order type, he walks off from his more violent partner who ends up taking on a whole mob on his own.   Quickly he learns how even with a fast gun, he can't do it all alone.  Will he have to?

This is a fast paced story that does a good job of throwing bullets on every page as well as giving you a one two punch on characterization.  The two main characters are just barely more dimensional than the cardboard cutout criminals they fight, but it's just enough to make the story interesting.   Burks does a good job of not only showing personality traits, but also of showing how characters evolve and grow.  This is definitely a shining example of what pulp tales could be when done right.

FOUR OUT OF FIVE TIPS OF THE HAT-Cops, robbers, bullets, and character growth.  Wow. 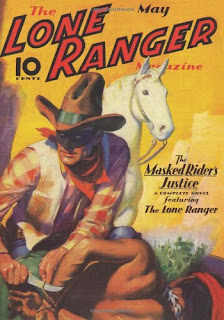 CAVE OF TERROR
from the Lone Ranger Magazine
by Fran Striker
August, 1937

I've read enough western pulp and read, seen, and heard enough Lone Ranger to know what to expect when I read a tale starring the Masked Man and his Indian companion.   OK, so even I can be wrong!  CAVE OF TERROR on its surface is a tale of the Lone Ranger and Tonto going after bad guys who are holed up in a labyrinthine cave led by a criminal mastermind who might also be an once well respected judge.  This leads to all the stereotypical western conceits, confrontations, and cliches and Striker deftly nails every single one of those.

But CAVE OF TERROR exceeds the typical western pulp limitations.  This is a thriller bar none and I will honestly tell you that The Ranger in this tale is not a super heroic man in a mask, but a hero who gets in way over his cowboy hat more than once and knows it!  Striker amps up the danger and intrigue, setting a very good stage for the 'Who is the Boss' mystery and puts the Ranger in situations that test even his abilities and does it in a very believable way.  CAVE OF TERROR is a fantastically wild, pulse pounding well paced mystery adventure!

FIVE OUT OF FIVE TIPS OF THE HAT!-Hi yo, Silver!! For sure. 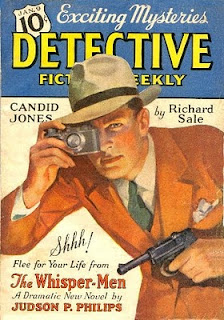 This is the first story to star Candid Jones, one of Richard Sale's most used pulp heroes.  Jones, along with another creation, Daffy Dill, established Sale as an author skilled at writing off kilter, yet consistently well paced hard boiled detective stories.  Although LONG SHOT does have the qualities that made Sale the legend he became, it isn't really a top of the line tale.  The storyline concerns attempts to manipulate races at a racetrack with a good dose of murder thrown in.  Sale's characterizations are extremely entertaining and the wrap up of the case is fairly decent, but the build up lags in parts and in other parts simply lacks cohesiveness.  The connections that have to be made to discover the killer's identity aren't really as strong as they could have been.  But overall a fine debut for a neat character.

THREE OUT OF FIVE TIPS OF HANCOCK'S HAT-Less racing, more Candid would have been nice.
Posted by All Pulp at 12:29 PM